Japanese society is known for its politeness, which is why knowing a few key etiquette tips for travel in Japan can be really helpful.

Its many etiquette rules can be daunting to anyone planning to visit Japan.

While there's no need to get overly anxious about making social faux pas, noone should put their foot in it if it can be easily avoided. 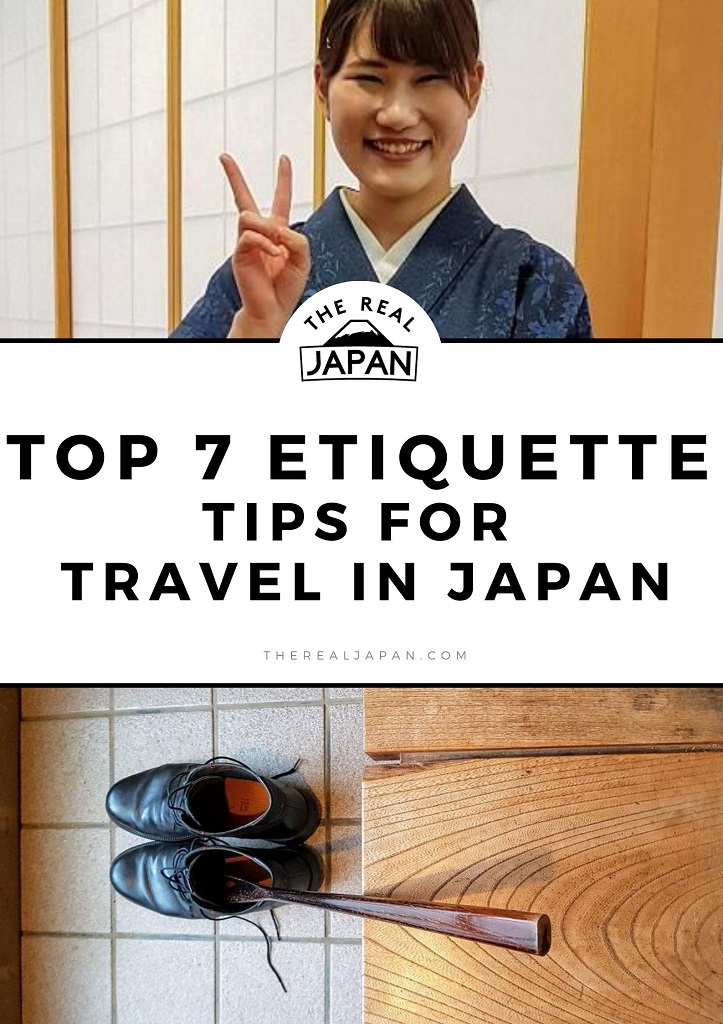 Top 7 Etiquette Tips For Travel In Japan
by Rob Dyer

Don't Be That Loud Foreigner

There’s a phrase in Japan that gaijin (foreigners) are often given a ‘gaijin pass’ to make mistakes. People will be understanding. However, observing a few key customs will help you blend in with the locals.

The subject is so extensive that there are several books available on the topic. But, for starters, here's our Top 7 Etiquette Rules to follow in Japan...

#1 Be Considerate And Blend In 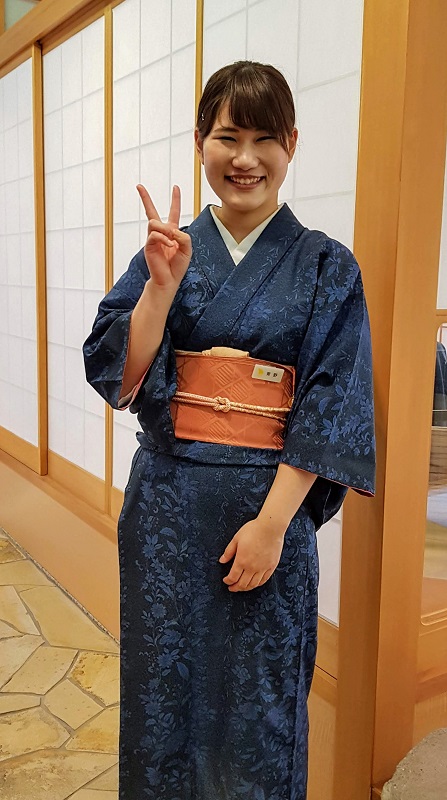 Japanese society often means foregoing some personal expression so as not to stand out. The Japanese have a saying: “The nail that stands out must be hammered down”.

Many people do not speak while using public transport, even if they are travelling with friends or family members. If you do speak, do so quietly so as not to disturb other passengers.

Many people do not speak while using public transport

Few things make me wince more inside, than seeing a loud foreign tourist, stomping about, gesticulating wildly, practically shouting as they speak.

Don't be that loud foreigner who stands out!

Be considerate of others (surely something we all do everyday anyhow?) and try to blend in as much as possible. Using this as a general guiding principle will serve you well on your travels in Japan. 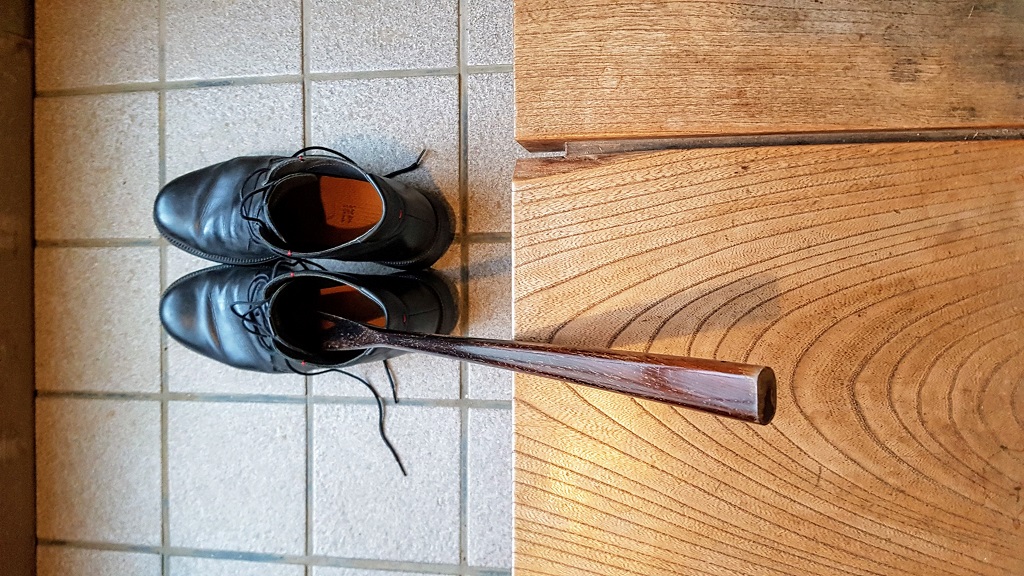 Bowing aside, perhaps Japan's best-known custom is removing footwear when entering a home.

Japanese culture makes a clear distinction between soto (outside) and uchi (inside), and this is where this custom originates.

Often you’ll exchange your outside footwear to indoor slippers. This is done at the genkan - an area directly inside the entrance, designed as the place where external footwear is removed and left.

This is probably the main social faux pas that (even the very polite) Japanese will actually pick you up on. Whether in private or in public.  Don't sweat it if someone does point out your error. You won't be the first, or last to do it. 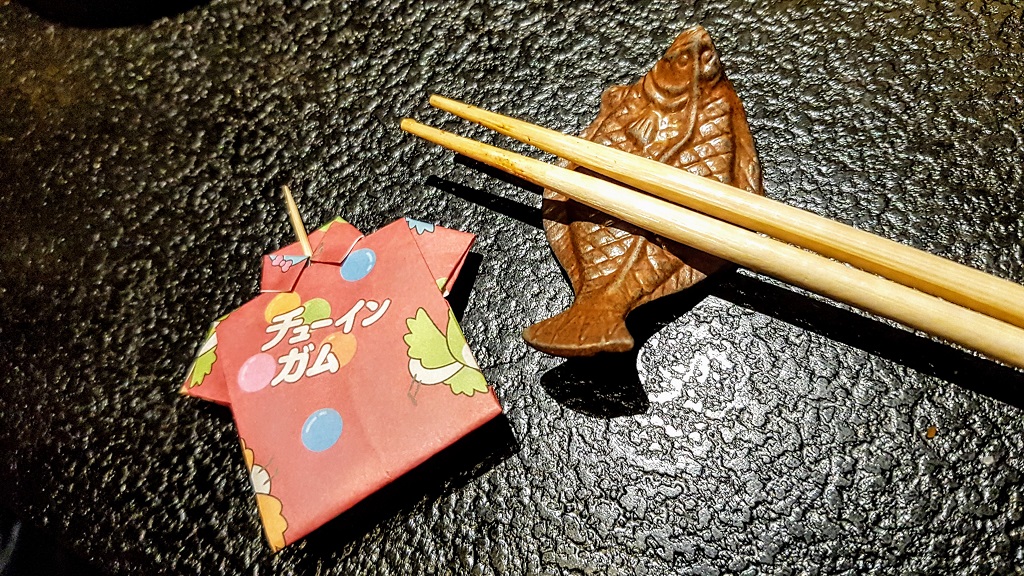 There's a lot of etiquette involved when it comes to using chopsticks. Here are three essential chopstick manners to get your started:

Number 2 on the list is frowned upon also because it relates to funeral rites. When a person is cremated in Japan (as virtually all are) mourners pick up bones of the deceased with chopsticks and pass them into an urn. The act of passing food with your chopsticks is seen as resembling this.

If you struggle to use chopsticks simply ask for a knife and fork or a spoon. Many restaurants and izakaya will have them. Some modern Japanese dishes are even sometimes served with a spoon.

No-one will be offended if you need a bit of cutlery assistance when dining. 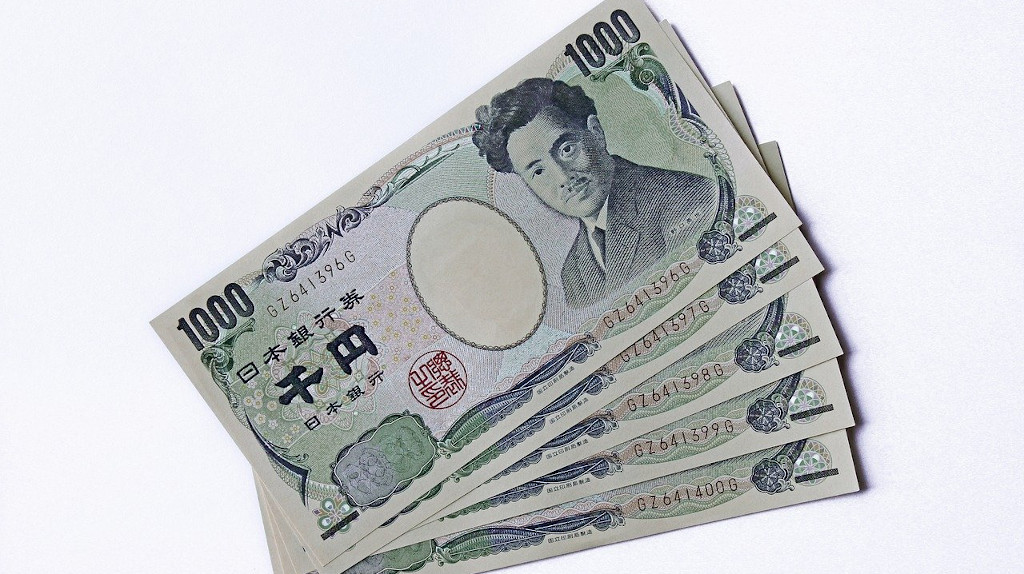 In Japan there is no such thing as tipping.

(No more trying to remember what percentage you are supposed to tip!)

Don't make the mistake of trying to tip, thinking you are being extra considerate. You are more likely to offend the person you're offering the tip to.

There is a little-known exception to the ‘no-tipping’ rule.

When you’re on a guided tour (such as a one-day coach trip), it is acceptable to tip your guide at the end of the tour if you especially enjoyed it. A modest monetary gesture is fine. If you’re unsure how much - then see what the locals are tipping and judge by that.

#5 Using A Phone In Public 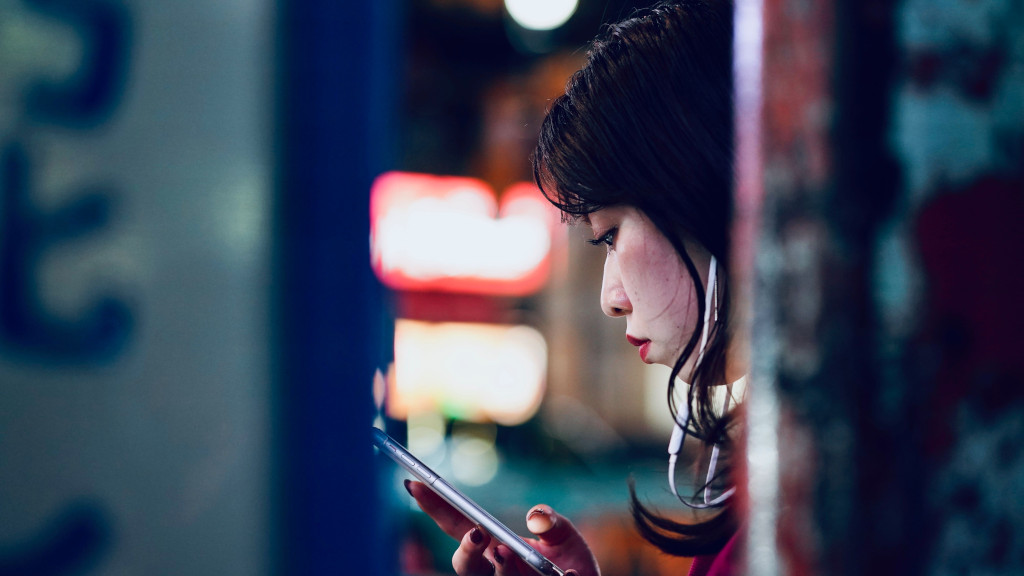 It's not the done thing to talk on the phone when using public transport. Don't be surprised if staff ask you to stop. It's fine to use it to play games (provided the sound is off), browse the web, check your messages, etc.

On Japan's shinkansen bullet trains, you'll see signs in the carriages asking you to take and make calls only in the vestibules between cars, or in a designated areas.

Don't watch videos or listen to music out loud in public

Using phones in restaurants or cafes is considered impolite and inconsiderate of others. If you must make or take a call, step outside to do it.

Don't watch videos or listen to music out loud in public. 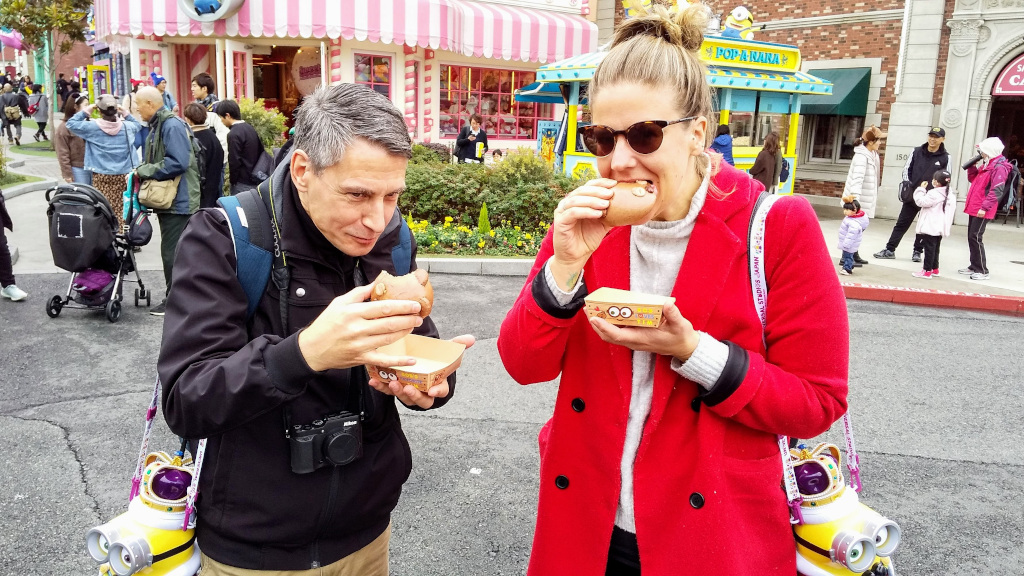 Although you do see people sometimes eating on the street in front of yatai (street food stalls), walking along and eating or drinking is a no-no.

Don’t eat or drink on public transport. However, on long distance journeys eating ekiben (‘station bento’) boxed meals on bullet trains is considered a part of the experience - so enjoy it.

Eating outside within the grounds of theme parks (like I am doing in the photo above, taken at Universal Studios Japan) is also fine. 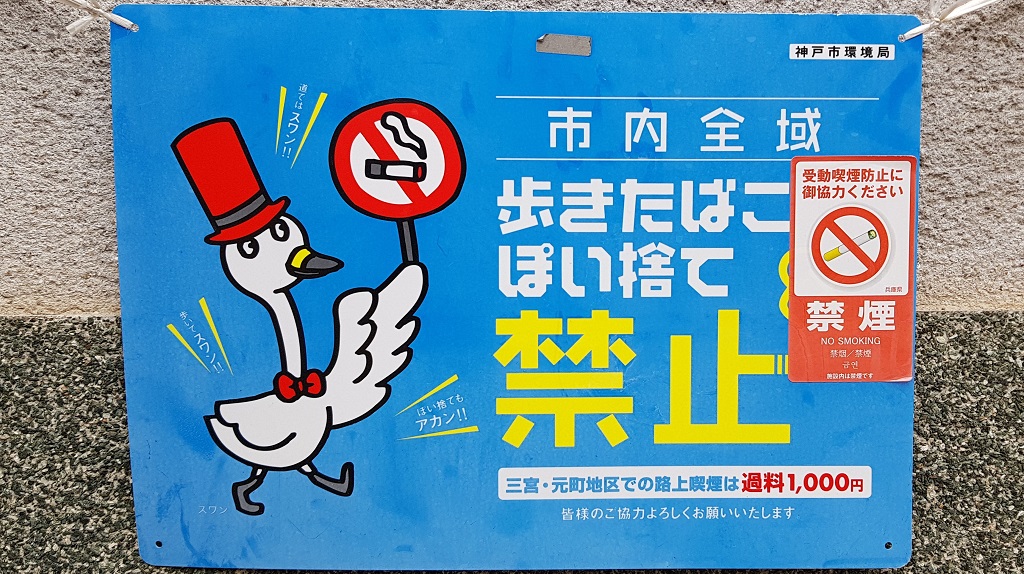 Even if you can't speak Japanese, it's often easy to get the gist of public information signs

Don’t expect that most people in Japan will be able to speak English. They won't.  Besides, it's polite (and easy) to learn at least a few useful Japanese words and phrases.

No one will expect you to be fluent, but any Japanese you do use will show you to be a considerate traveller and be welcomed. Just use whatever Japanese you have - no matter how little that may be.

Don’t expect most people in Japan to speak English

Also, the Japanese are particularly adept at being attuned to the needs of others, especially when those in need are customers. It's called omoiyari. So even if you can't always express yourself in their language, you can work on the basis that in most instances, the locals will do their best to understand and assist you.

Nevertheless, a small amount of well-chosen Japanese can go a long way during your travels in Japan. If you'd find a reference of 32 key travel-related Japanese words and phrases handy, then check out my first Japan travel guide.

Not being able to speak Japanese is the No.1 concern of most visitors to Japan. Our (most popular) post How To Travel in Japan (When You Don't Speak Japanese) will guide you further on the subject.

These are just a few essential customs to be aware of and observe.

There are plenty more, which I'll probably explore more widely in another, more in-depth article. In the meantime, what other Japanese customs or points of etiquette do you think are essential or would add to this list? Leave a comment below.

Bookshop Booklist: 5 Books About Etiquette, Customs and Manners in Japan*

https://bookshop.org/lists/etiquette-customs-and-manners-in-japan
*Shipping to US customers only

How to Travel in Japan When You Don't Speak Japanese

How To Travel in Japan (When You Don't Speak Japanese)

How The Japanese Anticipate Other People's Needs

Onsen Tips For Those With Tattoos

Review: Diary of A Tokyo Teen