Shikoku, Japan's fourth-largest island (after Honshu, Hokkaido and Kyushu), sits just below its more famous mainland neighbour Hiroshima. And yet it is the largest island least visited by foreign tourists.

Which makes it an ideal destination if you want to easily get 'off the beaten path' and encounter fewer tourists, but without being in the wilderness. 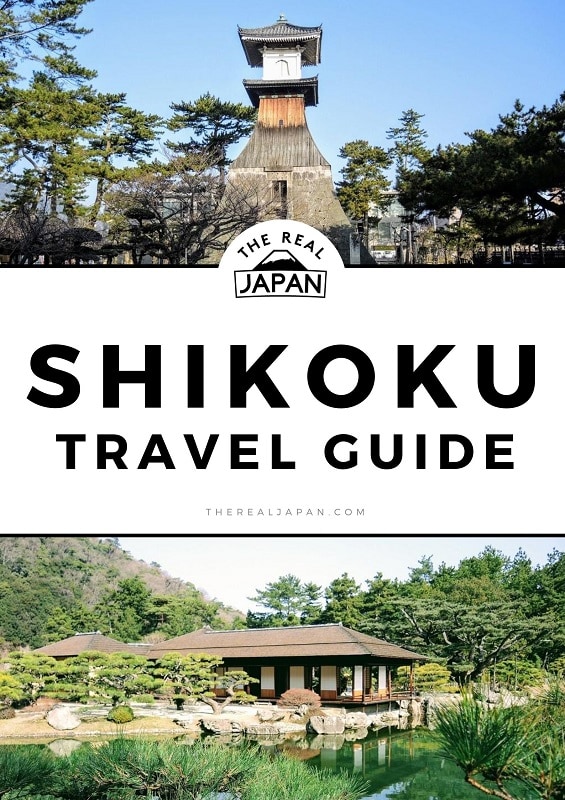 Shikoku sits just off the southwestern coast of Honshu, and above Kyushu. It nestles in between the calm Seto Inland Sea on its northern side, with the Pacific Ocean buffeting its southern coastline. It's largely an agricultural island and its warm climate is well suited to growing a variety of citrus fruits.

The island is 18,900 sq km (7,300 sq miles), with a population of around 4.1 million, accounting for little more than 3% of the total population of Japan. It comprises the four prefectures: Ehime, Kagawa, Kochi and Tokushima. Kagawa is Japan's smallest prefecture, and is famous for its udon noodles.

Shikoku can easily be included in a 3-leg itinerary taking in neighbouring Hiroshima and Okayama. Both are on the mainland of Honshu - just a short hop across the Seto Inland Sea. 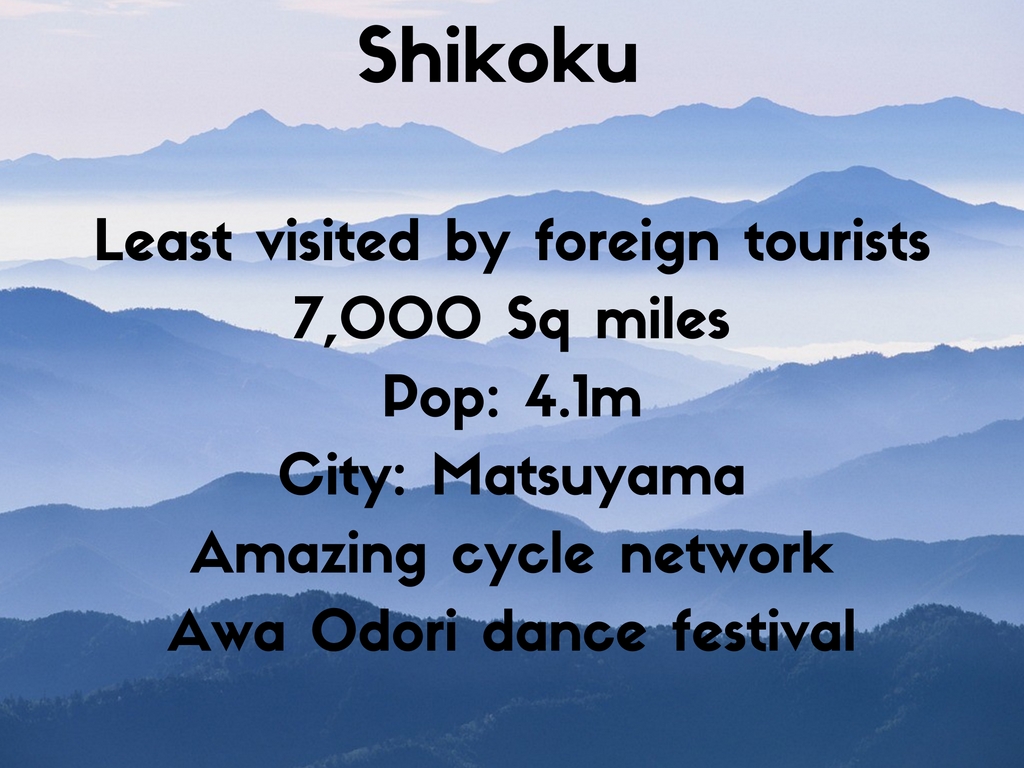 The climate is similar to southwest Honshu - humid and subtropical. The winters are mild. It has a lot of mountains but no volcanoes. The warm climate of Shikoku is well suited to the cultivation of citrus fruits, which are synonymous with the regions they are grown in.

Shikoku: the island and the region

The Japanese generally see (and refer to) Shikoku as a region and not just a single island.

That's because although there is an island named Shikoku, Kagawa Prefecture in the north, for example, includes several small islands in the Seto Inland Sea. The most well-known of which is Naoshima, famous for its contemporary art scene.

The Japanese are drawn to Shikoku by its reputation for culture and nature, and the group of islands appears in The New York Times’ "52 Places to Go in 2019" list.

Naoshima is a small island in the Seto Inland Sea just off the north coast of Takamatsu.

Probably Naoshima Island's most famous artist connection is the one with contemporary artist Yayoi Kusama. Her iconic giant red and yellow pumpkin sculptures on the coastline are a major draw for art-lovers around the world.

If sculpture is your thing then be sure to check out the Isamu Noguchi Garden Museum. The entire grounds were designed as an 'environmental sculpture'.

Naoshima was selected as one of the world’s top 7 “must visits” in Condé Nast Traveler magazine. 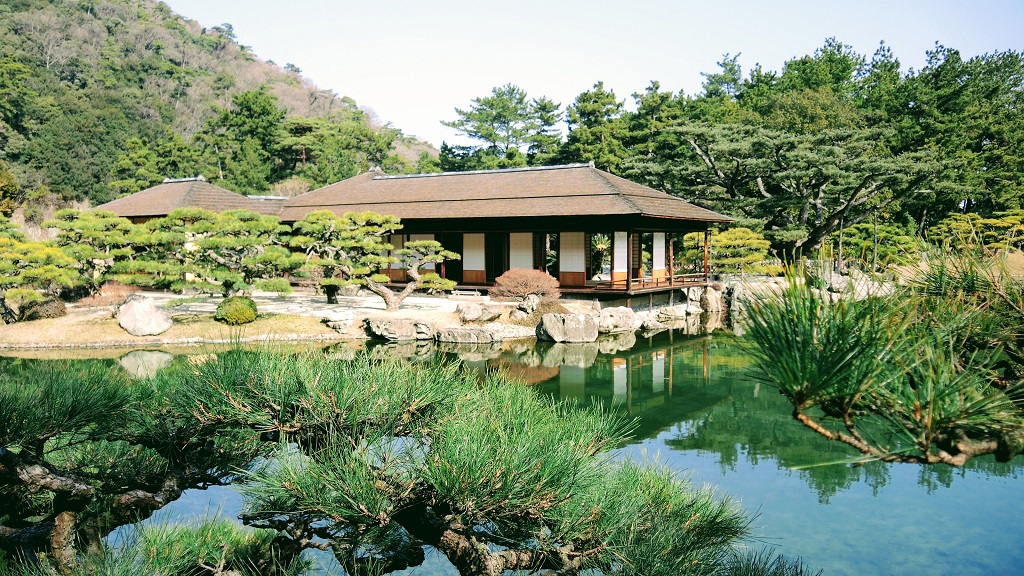 Ritsurin Garden in Takamatsu is one of Japan's finest gardens

By any standards Ritsurin Garden in the city of Takamatsu, in Kagawa Prefecture in the north of Shikoku, is one of the finest gardens in the whole of Japan.

It makes use of the 'borrowed landscape' technique with Mt. Shuin lending its slopes to the impressive views of this large landscaped park.

It's not as well-known as other Japanese gardens, making it possible to experience it with far smaller crowds. The sprawling garden has six ponds, and thirteen landscaped hills among its 750,000 square meters.

The Kikugetsutei teahouse (accessible for a small fee) overlooks the main pond and is the perfect setting to experience the Japanese Tea Ceremony. Boat rides on the pond are also bookable. Don't forget to visit their Koi ponds while here. 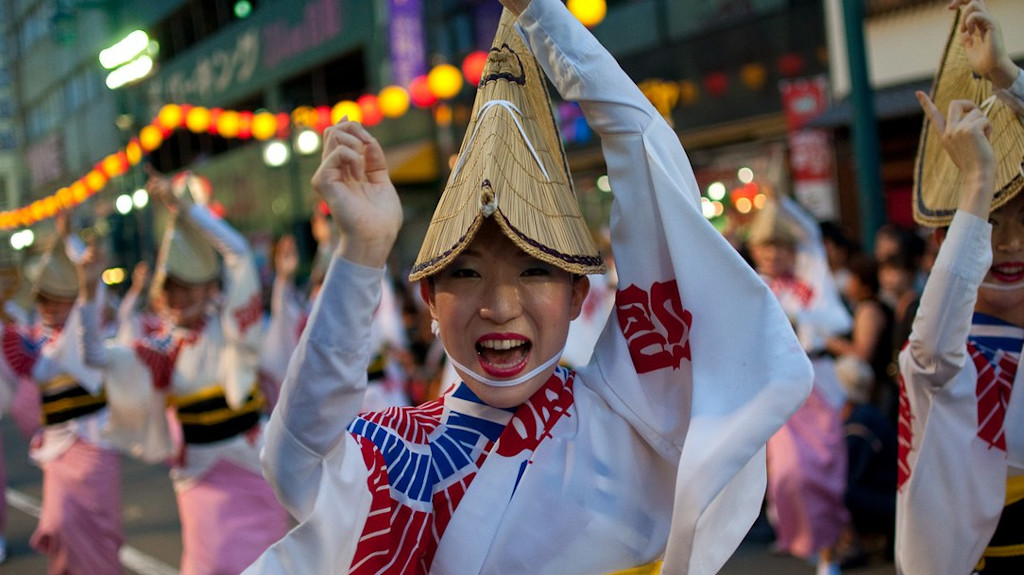 Every August Japan's summer festival goers descend on Tokushima Prefecture, on Shikoku's eastern side, for the annual carnival that is the Awa Odori.

It's the largest folk dance festival in Japan, attracting over 1.3 million visitors every year. Awa is the old name for Tokushima Prefecture, and odori means dance.

Dating back over 400 years, this vibrant matsuri sees groups of choreographed dancers and musicians parade through the streets. Performers wear a colourful array of obon dance costumes, chanting and singing as they make there way through the city.

It's that big a deal that even Tokushima's airport is officially called Tokushima Awa Odori Airport.

Shikoku has an extensive and well implemented cycle route that circles the entire island. Known as the Shikoku Circuit Route, the 1,000km loop largely hugs the Shikoku coastline with stunning views over the Seto Island Sea, the Pacific Ocean, and the Uwa Sea.

It also connects to the epic Shimanami Kaido cycling route that runs 70km along dedicated cycle paths from Onomichi City, in Hiroshima Prefecture on the mainland, through six islands to Imabari City in Ehime Prefecture on Shikoku.

The Cycling Island Shikoku website has a recommended 11-day itinerary for the full circuit, as well as as couple of half circuit options. 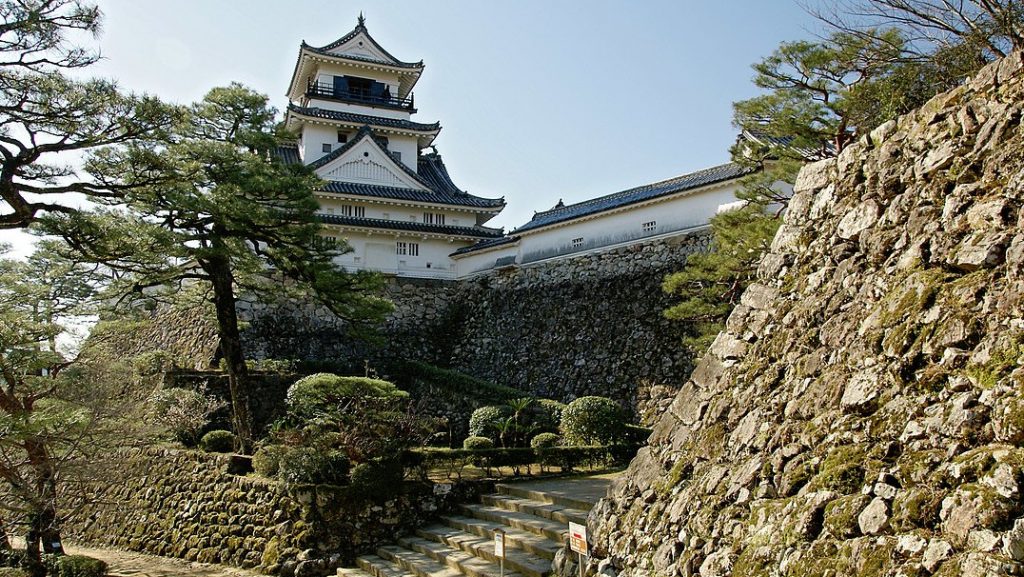 88 Temples of The Shikoku Pilgrimage

Established over 1,200 years ago, the 88 Temple Pilgrimage, is one of the oldest pilgrimages in the world. It's the perfect way of getting off the beaten path in Japan.

The 88 Buddhist temples included span all four of Shikoku's prefectures. Only the most devout cover all of the temples (and only a few of those still walk the route), but you can dip your toes in by visiting Ryozenji in Naruto City, the first temple at the start of the epic 1,200km trail.

It's easy to dip in and out of the full route. Use the official Shikoku Henro website to help research what to do and see and use their interactive planner to build your own bespoke route.

The temples are associated with the Buddhist monk Kōbō Daishi who founded Shingon Buddhism in 794 in Koyasan, Wakayama. 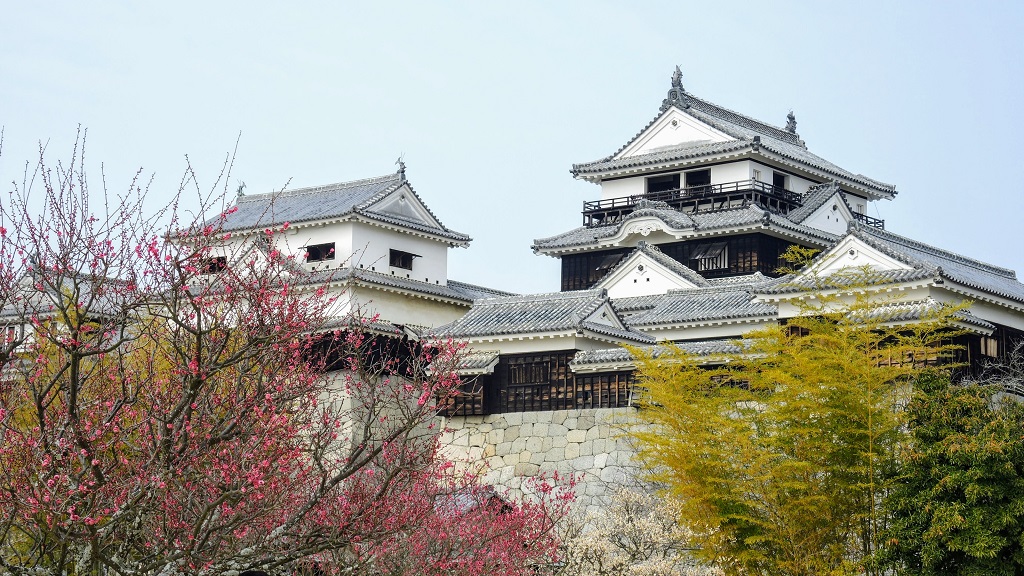 Matsuyama is the capital city of Ehime Prefecture on the island of Shikoku in Japan and also Shikoku's largest city. Considered by many to be the island's most attractive city, it feels more like a large town. It has a rich literary and onsen culture.

Dogo Onsen, one of Japan's most famous hot springs, boasts a 3,000-year royalty-studded history and can still be bathed in today. In modern times, it provided inspiration for Studio Ghibli's Oscar-winning Spirited Away, which features an onsen that looks remarkably similar.

Why not expand your cultural experience at Dogo Onsen and take in three traditional Japanese cultural activities while you are here? 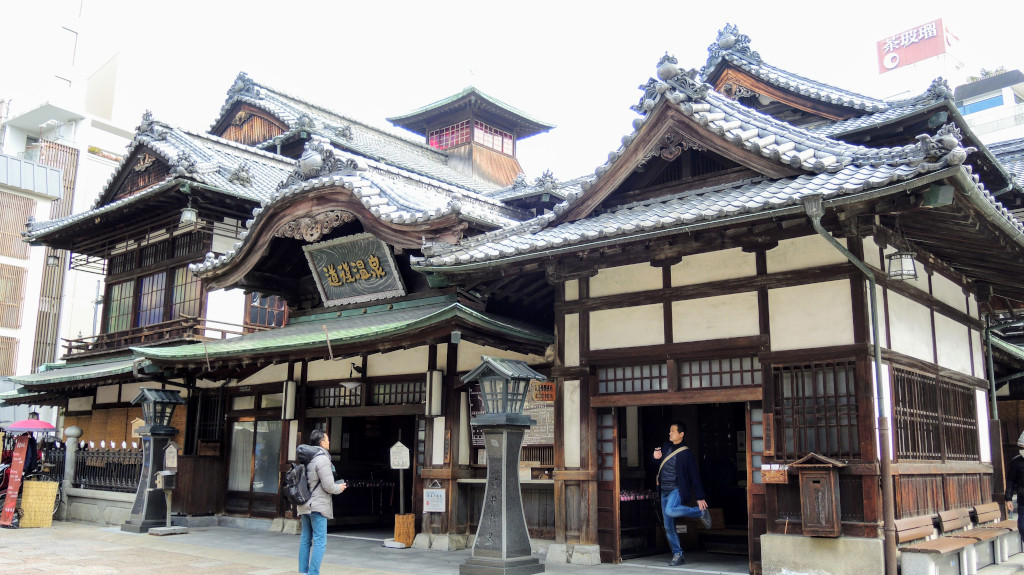 The arcades around the onsen are ideal for a refreshing glass of the island's famous (and delicious) freshly squeezed mikan citrus fruit juice, or for sampling the local craft Dogo Beer .

Matsuyama Castle is one of only a handful of Japan's original (not substantially re-built) castles. It's located high above the city and offers panoramic views over the city below. Cherry trees line the approach to the castle, making it a memorable place to view sakura in springtime.

If you want to hit the highlights of the city, and would appreciate a guided tour, then this one from Voyagin is good value.

Still sometimes referred to as 'the last clear stream of Japan', on account of it not having any dams and its remote location away from any big cities, the Shimanto River, in Kochi Prefecture, is Shikoku's longest river.

The river is popular with tourists who come here to admire its natural beauty, fish its waters, cross it using one of its bridges, take pleasure cruises and to canoe along its  free-flowing waters. 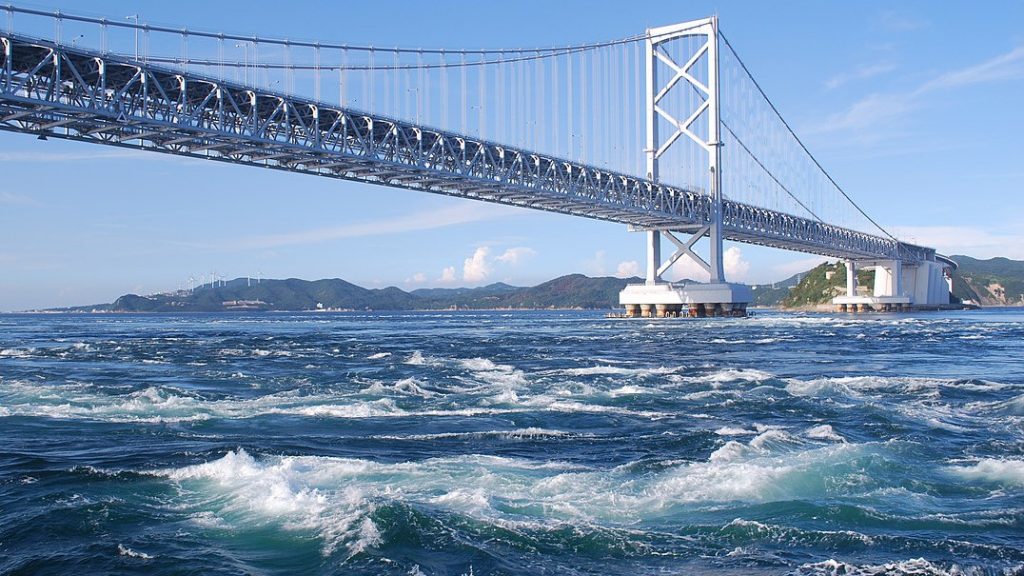 The current in the Naruto straight, a channel between Naruto in Tokushima and Awaji Island in Hyogo, is the fastest in Japan.

Twice a day, the tides move huge amounts of water, at speed, through the channel creating large tidal whirlpools that are themselves a tourist attraction.

In the spring, the speed of the water can create whirpools up to 20 m (66 ft) in diameter. This impressive natural phenomena can be viewed from sightseeing boats operating in the straight. It's also possible to see the Naruto whirlpools as part of a wider private excursion that takes in the shore of Tokushima and Naruto.

The whirlpools inspired the name for the character Naruto Uzumaki from the famous manga and anime Naruto, 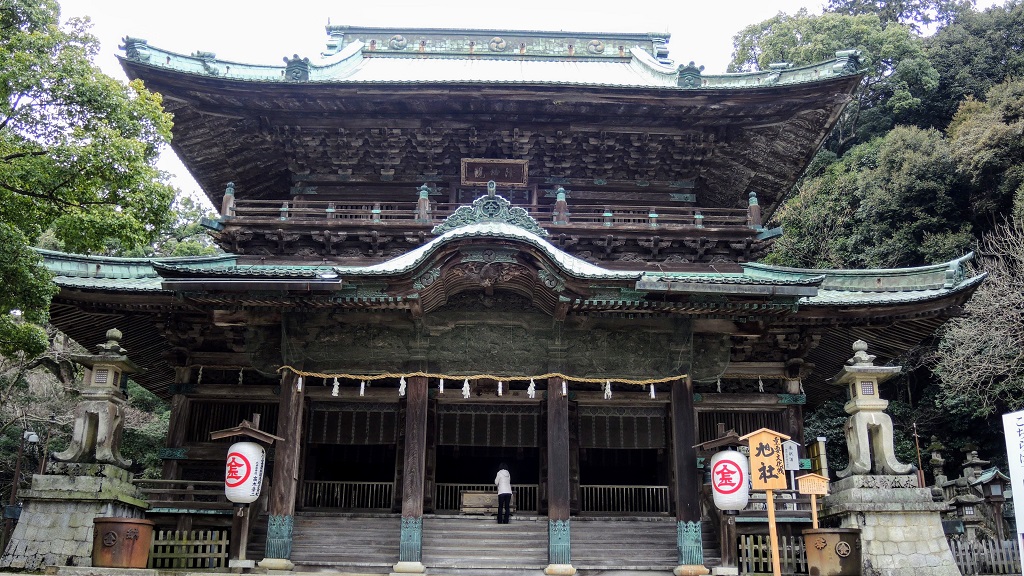 The sacred Shrine is one many Japanese hope to see in their lifetimes. However, the vast majority of them, and passing foreign visitors, will only see Kotohira Shrine as a day trip.

Few will stop to explore the town of Kotohira itself. Fewer still will think to stop here overnight (or even for a few days). But I recommend doing so. 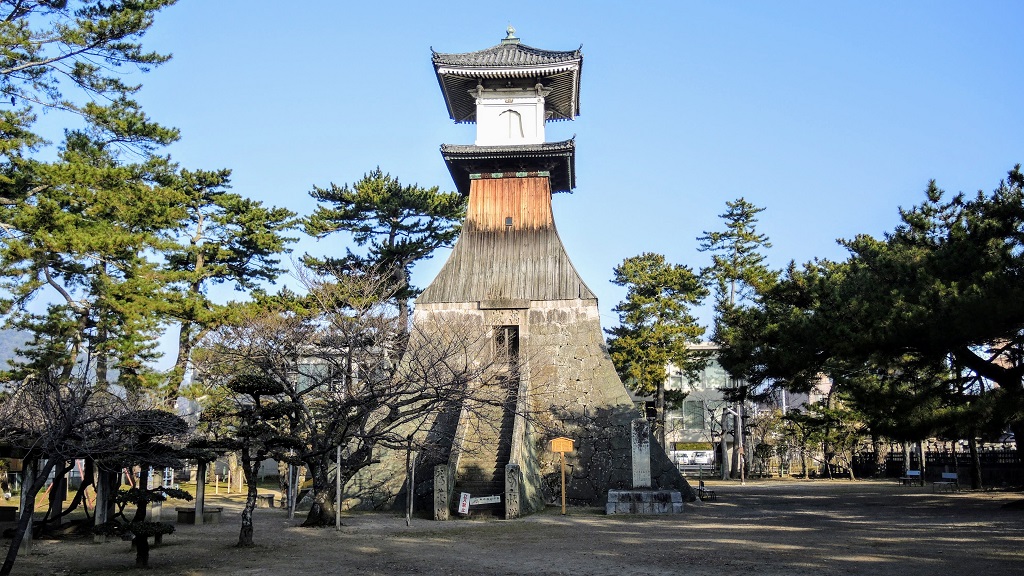 However, my tip is to use the JR line to arrive in Kotohira, but for the return journey a few days later, use the smaller, regional Kotohira Railway (Kotoden), whose distinctive yellow retro-style trains run between Kotoden Kotohira Station (where the line terminates) and Takamatsu Chikko Station.

Shikoku is readily accessible from nearby Osaka, Kyoto, Hiroshima on the mainland and Beppu, in Kyushu's Oita Prefecture.

Public transport in Shikoku itself can take a little bit of pre-planning to get the most out of it. Driving might be an easier and more flexible option.

Although not part of Japan's Shinkansen high-speed rail network, there are frequent connections from Okayama on Honshu to Takamatsu - the island's second largest city.   and from there on throughout the island.

All four prefectural capitals Takamatsu, Matsuyama, Kochi and Tokushima have small regional airports. All of these have flights to Tokyo and other major Japanese cities including Osaka, Nagoya, Sapporo, and Fukuoka.

See my airports list below for links to the English versions of all the airport websites.

If you're driving, Shikoku is connected to Honshu by three bridges: Kobe-Awaji-Naruto Expressway, in the east, Seto-Chūō Expressway (Central Shikoku) and Nishiseto Expressway in the west. But beware of toll charges.

If coming from Kansai or eastern parts of Japan, buses via Awaji Island are the quickest way to Shikoku.

There are several ferries serving Shikoku which can be taken from major cities like Kobe and Hiroshima. 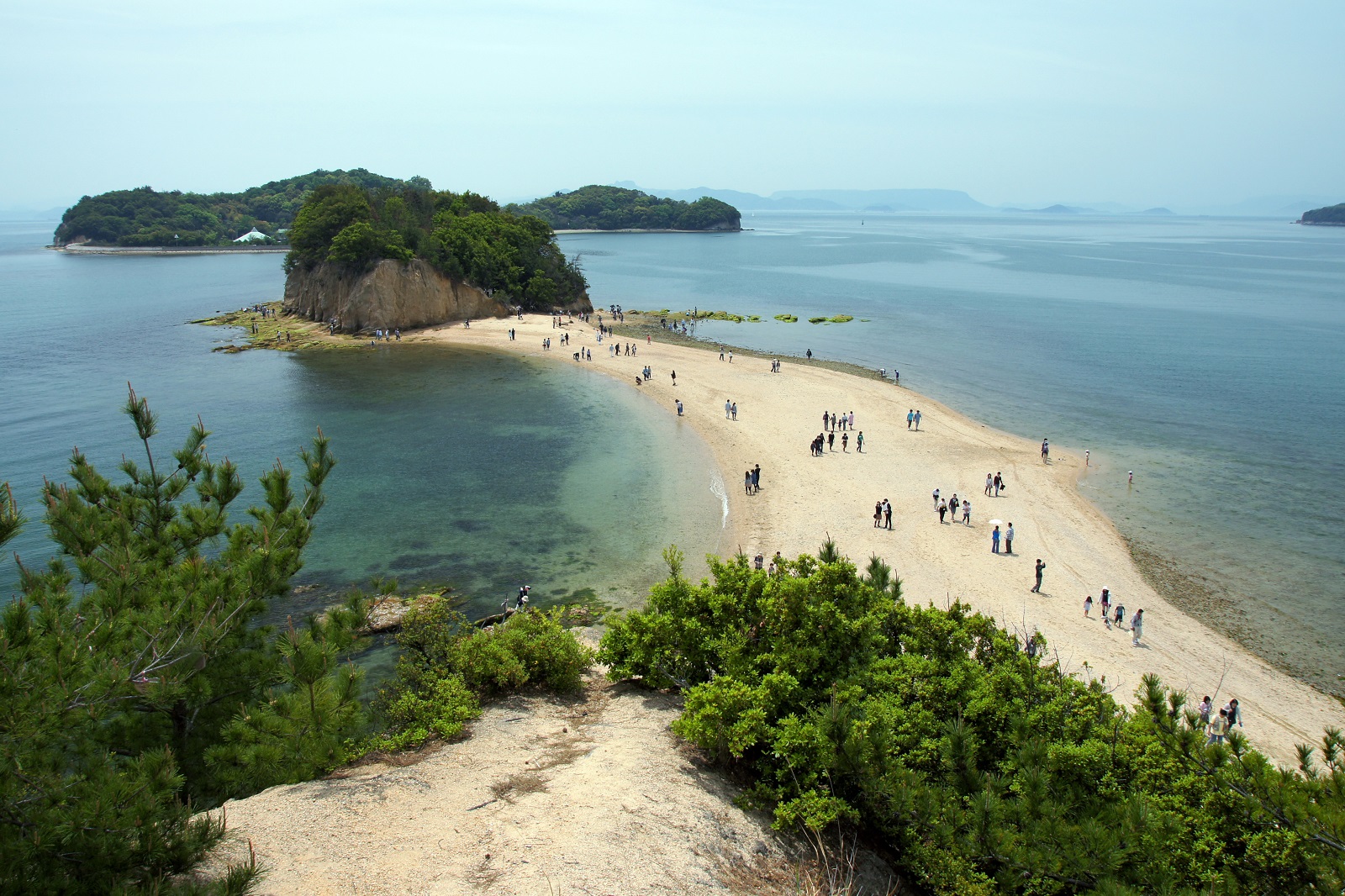 Angel Road on the island of Kuroshima

Selected posts about destinations in Shikoku and nearby islands:

You can view our YouTube video playlist dedicated to Shikoku HERE.

Have some questions about exploring Shikoku? Want help planning a Shikoku itinerary? We offer a couple of services that you might like to take a look at.

Our Travel Planning Calls are ideal if you have a few unanswered questions about a trip you are planning, or would like feedback and suggestions on an itinerary you are building.  Learn More HERE.

If you'd rather hand over all the hard work for planning an entire trip to us then our Travel Planning Service is tailor-made for you.
Learn More HERE.

Further quick guides and checklists are available in our Store.

If you found this guide helpful, please share this photo: