With the influx of tourists into Kyoto in particular, 'Geisha spotting' has become something of a tourism subculture.

And, although the popularity of geisha has waxed and waned down the centuries, the fascination they generate in others is as strong today as it ever was.

But before an ordinary woman can be transformed into a geisha, she has to undergo a demanding and rigorous training programme that typically lasts for four years.

During this period they are known as maiko - apprentice geisha. 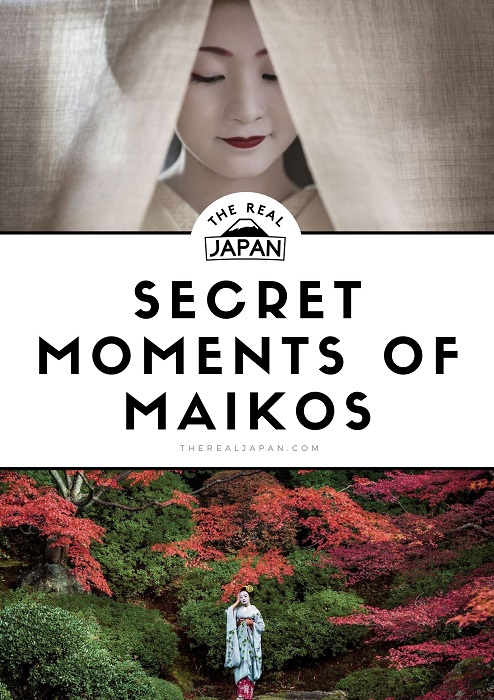 In this gorgeous collection of more than 80 beautifully shot images, French-born Philippe Marinig has managed to capture the intimate, rare details of the lives of maiko, in Kyoto's Gion quarter. The city’s most famous entertainment district, dating back to the 15th Century.

Originally built to accommodate the needs of travelers and visitors to Yasaka Shrine, Gion evolved to become one of the most exclusive and well-known geisha districts in all of Japan, and the center of Kyoto's traditional arts.

The Grace, Beauty and Mystery of Apprentice Geishas

Subtitled The Grace, Beauty and Mystery of Apprentice Geishas, Marinig's beautiful and candid photography comes in a truly sumptuous edition courtesy of specialist publisher Gatehouse. This is the maiko coffee table book to end all maiko coffee tables books. 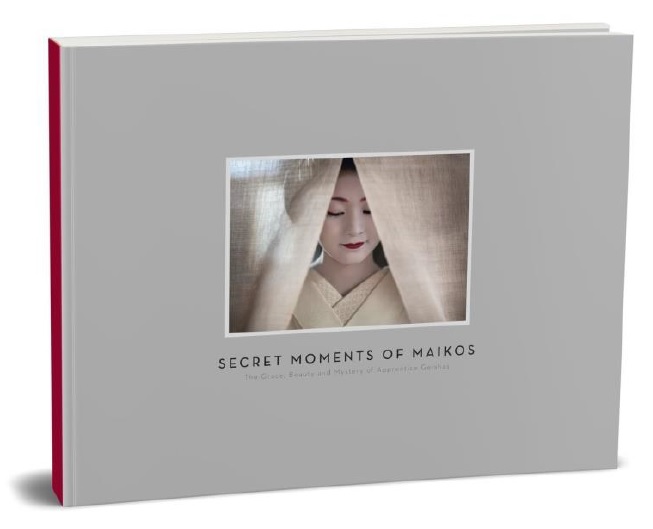 Marinig's photographs are accompanied by haiku in original Japanese, as well as in French and English, further enhancing the mood of each image.

It's easy to forget that these icons of Japanese culture are just regular, young women. They love spending time on their smartphones, laughing, and gossiping as much as any young Japanese woman does. And a number of Marinig's images present that side of his subjects.

Some of my favourite photographs in the book are those that show the maiko going about their work in the context of modern Japan.

The images of individuals or groups of maiko getting into, or riding in the back of taxi cabs, are perhaps the best at depicting this fascinating cultural juxtaposition.

Born in 1962 in Chateau-Arnoux in the French Alps to a family of artists, Philippe Marinig became interested in photography as a teenager.

After studying fine art in Boston, and armed with experience from his time with Denis Brihat and the French Ministry of Defense's photographic service, he worked as a freelance photojournalist for Liberation and Globe in Paris.

His encounter with Eddy and Pierre Gassmann marked a turning point in his life career and he launched PICTO, a successful photo laboratory and art space in Cape Town in 1992. Here, he focused initially on commercial work in advertising and fashion photography.

Since 2006, Marinig has dedicated his work to personal artistic projects, exhibiting around the globe. Major subjects to date include shooting South Africa's wilderness and wildlife, and the worlds of sumo wrestling and geisha in Japan.

He currently divides his time between South Africa, Japan and Europe.

I recall watching a documentary about maiko in training. What strikes you is the incredible amount of dedication that's required to complete the maiko training, to go on to achieve geisha status.

It's perhaps ironic that such a relentless regime of extremely hard work and long hours, over several years, is completely hidden in the finished artform which, when captured in photography, fleeting moments frozen, is the very picture of serenity.

This theme is something that is picked up on by Marinig in an extended haiku at the start of the book.

Entitled Fluttering In Kyoto, in which he introduces us to our subject, Marinig contemplates on more than 400 years of the geisha as an artform:

"She is living Art.
But who hides behind this perfect image of Art?
Who is this woman?

Live the rhythm of her breathing.
Feel the tension of the concentration in her preparation.
Be witness to the confidence in a gesture, that has been repeated so many times, decade after decade, century after century."

A Rare Glimpse Into A Hidden World

Through his stunning photography, Marinig provides an exceptionally rare glimpse into a hidden world, in which we see the daily routine of the apprentice geisha.

From the mundane back streets, with their tangle of overhead power cables, these icons of Japanese culture emerge from humble okiya, boarding houses. Like vividly coloured butterflies escaping from their dull, brown pupa, they step out into the nighttime streets of Kyoto's historial Gion district.

As befits its subject matter, the book is exquisitely crafted and presented. Make with premium materials and thick, matt-finish pages presented in French-fold binding. A veritable objet-d'art.

As befits its subject matter, the book is exquisitely crafted

Coming in at 152 pages, 40mm thick, and weighing more than 1.5kg, it's fair to say this is intended to stay at home on the coffee table rather than be used as a reference guide in the field.

In addition to Marinig's own extended haiku, the book includes an introduction from Richard Collasse, the President of Chanel KK, Japan and 21 haiku accompanying the photographs. All are in English, French and Japanese.

Glimpsed applying their makeup, fixing their kimono, peering from behind the noren curtains of their working establishments, sitting alone in the backseat of a taxi cab en route to their next engagement.

Through his eyes, via the lens of his camera, Philippe Marinig has expertly captured beguiling and tantalising moments in the daily lives of maiko.

One can only hope that the captivating cultural asset that is the maiko/geisha is still around in another 400 years from now. 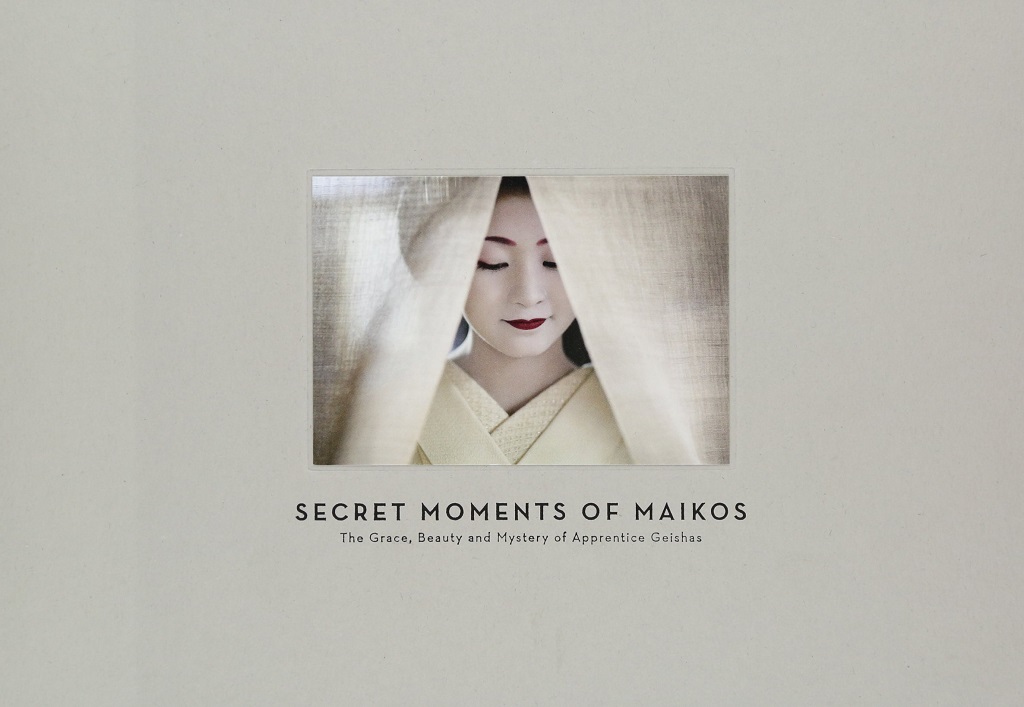 BUY on Amazon | BUY on Bookshop (US delivery only)

How You Can Experience Maiko in Kyoto

Imagine what it would be like spending private time with a maiko. Below is a selection of maiko experiences in Kyoto you may be interested in booking.

Each includes full details of the experience, date availability, customer reviews and offers immediate booking.
(Links will open in a new window to The Real Japan partner website Voyagin.)

Book an exclusive maiko experience in a Kyoto teahouse

Book an exclusive private dinner with a maiko in Kyoto

Take photos with a real Kyoto maiko at scenic locations

Buy the book on Bookshop.org:
Secret Moments of Maikos

Buy the book on Amazon:
Secret Moments of Maikos

Book an exclusive private dinner with a maiko in Kyoto

Take photos with a real Kyoto maiko at scenic locations 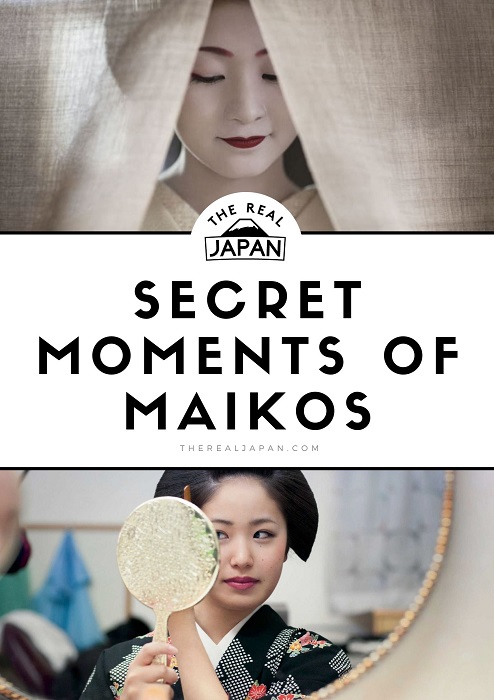 Have you read Secret Moments of Maikos? Or maybe you've read another book that inspired you to travel in Japan? If so, I'd love to hear your thoughts - leave a comment below.