Most people come to bustling Kyoto for the incredible wealth of Shinto shrines and Buddhist temples, and perhaps the hope of catching a Geisha or two walking elegantly in their geta to their next booking.

Kyoto is also a good city for shopping. With the main shopping areas relatively compact and within a quick cab ride, short bus journey or a little longer but still pleasant stroll on foot from the main train station.

Rare treats to delight the adventurous

As the main sights of Kyoto are all readily accessible, it's easy to understand why few venture off the popular tourist routes, particularly when those routes are themselves so rewarding.

However, as is usually the case in Japan, for those willing to explore a little further, and finding excitement rather than anxiety in heading away from the busy main thoroughfares, there are plenty of rare treats to delight the adventurous.

One such treat is the vegan and raw food cafe and boutique Stardust. 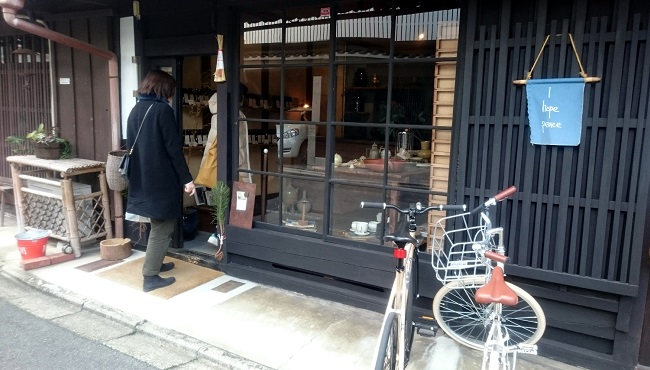 Northern Kyoto - off the beaten path

Stardust is in the far north of the city, within a few minutes walk of the forest - well off the tourist route. It takes a bit of getting to but is totally worth it. From Kyoto Station, get on the Kyoto Bus B1 line bound for Kamigamo Shrine. Get off at Shimogishi-cho stop. It's then just a few minutes walk up a quiet residential street.

It takes about 50 minutes by bus from Kyoto Station. If you are armed with the address and a map a taxi would be much quicker.

Related: Why You Should Explore Kamigamo Shrine In Kyoto

Owner Kana Shimizu got the idea for her cafe/shop when she was travelling in Denmark in 2014. While there, she came across an eco village which included a garden made by a woman who named it the Stardust Garden. Kana thought of this quote from an astrophysicist:

"As we follow the cells that form the human body to elementary particle levels, it is the same ingredient as the constituent that forms the star. That's why humans are also stardust." 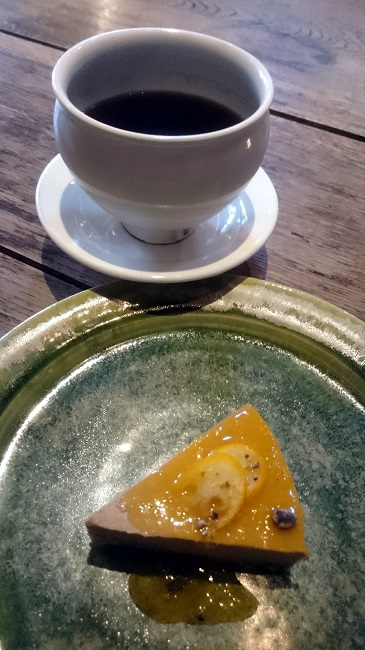 A few months later she happened to find an old machiya (wooden town house) in the northern district of Kyoto, that in a previous life functioned as a weaving factory where cloth was made. Falling in love with it, she decided to open up a cafe and boutique shop.

Outside, they'll often be a couple of bicycles, used by locals to get here. Above them hangs a sign saying "I hope peace".

The entrance to Stardust, directly from the street outside, takes you immediately into the the small boutique at the front of the ground floor. Here there is a wall display of a selection of Cha Yuan tea from France. 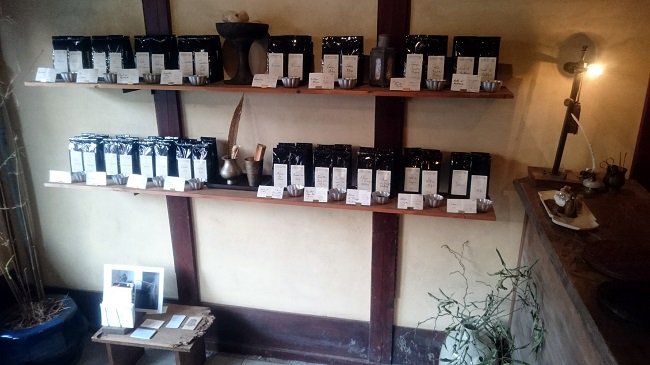 With its head office in Lyon, Cha Yuan is a tea specialty store with numerous branches in France. They blend deeply fragrant green, black and oolong tea sourced responsibly from around the world, including China. Cha Yuan founder Madame Nadia Be'caud was the first European invited to the international conference of tea held in China. Stardust usually has a good selection of their tea to purchase.

There's also an evolving choice of Japanese pottery, including the chance to buy some of the goblets and cups used in the cafe, and a carefully chosen handful of clothing both new and vintage.

The considered presentation of the wares is impeccable. Displays look as much like museum exhibits as they do goods for sale in a retail outlet. Not surprising then that the space is also used for talks, exhibitions and workshops. 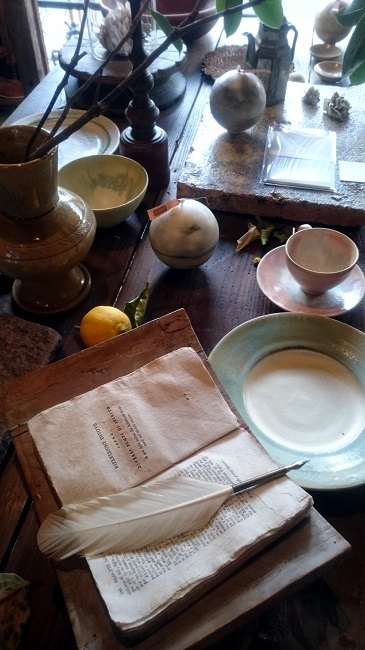 Walking on the stripped, bare wooden floorboards, the cafe is at the rear of the store.

To get to it, you pass through a narrow corridor, past the modestly-sized kitchen and preparation area. The cafe area has a double-height ceiling and sliding, glazed doors at the back that overlook a small courtyard garden (which in the warmer months adds another dining table).

Inside there are only four tables, of varying sizes - just 12 seats in total - which partly explains why it is recommended that you book in advance - particularly for lunch. We were here on a Thursday afternoon in January and though not 'packed' all the tables were occupied at one point or another during our visit. 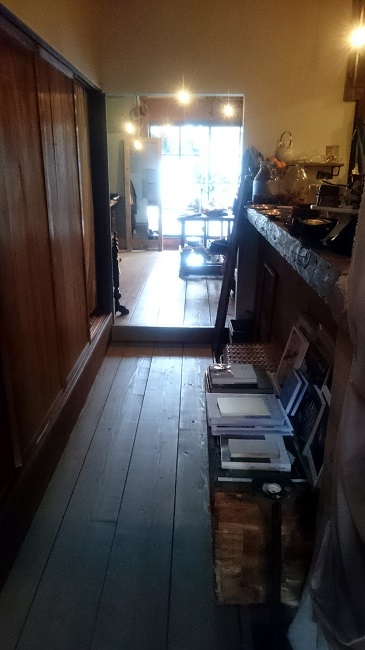 Inspired by autumn at dawn

If tea is your preferred drink there's an extensive menu (all menus are available in English) listing around six or seven different blends under each of the green, black and oolong types.

Each has an evocative name and description, and whilst some of these can be a touch too affectatious at times: "Inspired by autumn at dawn" and "Like a breeze through a Turkish garden" both appeared on our menu, these do reflect the considered aesthetic of Stardust.

If these examples and the fact that there are crystals in candlesticks on the tables sounds a tad too pretentious, then Stardust probably isn't for you. 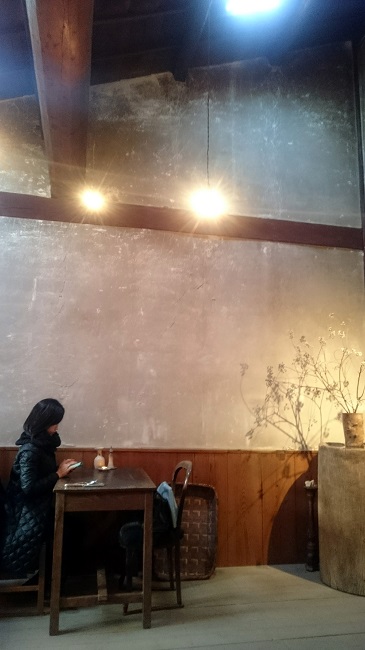 If coffee is more your thing, then there's the fairly full-bodied Stardust Coffee, made with organic roasted beans from East Timor, which I had.

The price per cup was 600yen and came with a note saying it included a 10% donation to 'the organization' - which I presume means some sort of co-operative in Timor where the beans are harvested.

Although we'd already eaten lunch earlier, and only came to Stardust for a dessert and a drink, by the look of the menu, Stardust probably doesn't disapppoint. They specialise in open sandwiches and couscous mixed with seasonable fresh vegetables.

Although not a vegan nor vegetarian, I often eat vegetarian/vegan dishes because they can be so full of flavour. So I'd be interested to return and sample the food in more depth. 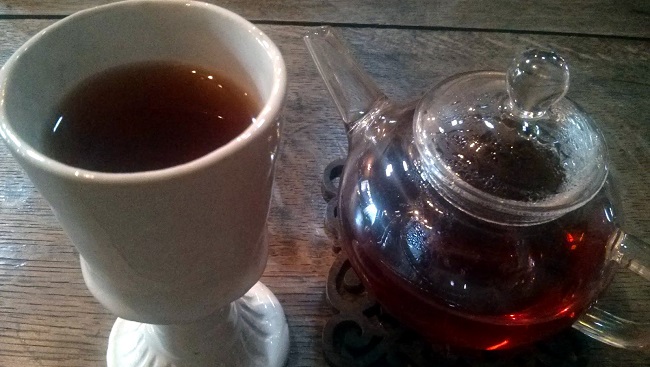 A freshly baked scone served with homemade jam and a dollop of tofu cream was 600yen. There was a freshly made 'tart of the day' but I can't recall what that was. Today's raw cake though was a rich and creamy confection of raw cashews, blended seasonal fruit including dates, figs and rasins, and coconut oil.
It's crumbled crusty base made with coconut flakes and nuts. This was 750yen and what I opted for to go with my Stardust coffee. 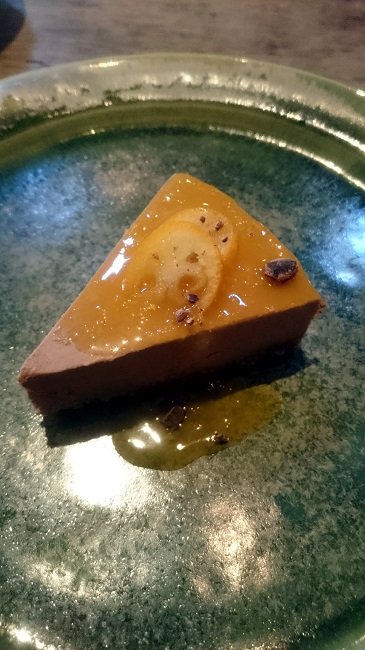 Unlike many other cafes in Japan, Stardust doesn't offer a drink+dessert set option. Meaning everything is priced individually. My cake and coffee then came to 1,350yen (around US$12.45 / £9.90) - so not what you'd call cheap.

But you wouldn't come to Stardust for cheap. You'd come for quality and the experience of the environment.

Related: Why You Should Explore Kamigamo Shrine In Kyoto

The Real Japan has partnered with some of the finest and most creative travel companies operating in Japan to bring you this hand-picked selection of tours:

Powered by GetYourGuide. Become a partner. 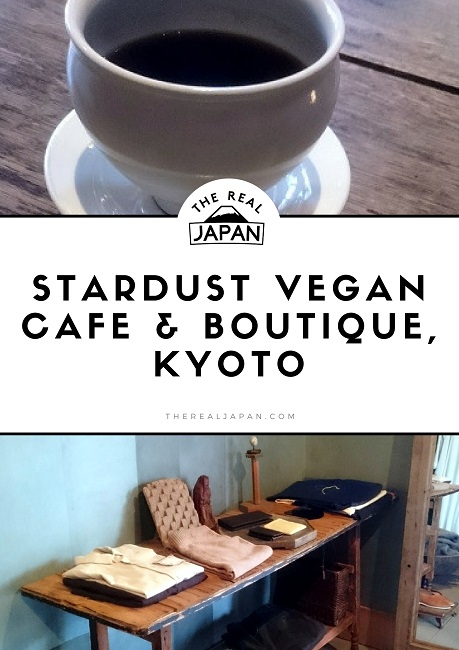 Maybe you've been to Stardust - if so what did you think? Perhaps you've found the ultimate boutique cafe in Japan? If so, I'd love to hear from you - please leave a comment below.