"If I were trapped in one city and had to eat one nation's cuisine for the rest of my life, I would not mind eating Japanese. I adore Japanese food. I love it." - Anthony Bourdain

A healthy diet is a major factor in Japan's high life expectancy. Okinawan food from local farms and seas is diverse and health-giving.

Japanese food is one of the biggest attractions for people visiting Japan.

The combination of incredibly healthy food, unique taste and flavour sensations (umami anyone?), arguably the best beef in the world, and the occasional insane food invention, mean the chance for tastebud discovery in Japan is never ending.

And the southern island of Okinawa counts its food as a major factor in accounting for having some of the oldest people on the planet.

The Okinawa Island are an island group in Okinawa Prefecture, in the south-west of Japan. They are part of the larger Ryukyu Islands group.

Unlike much of Japan, the Okinawa Islands have a subtropical climate, supporting the production of sugarcane, pineapples, papaya, tropical fruits and cut flowers.

Japan's high life expectancy is well-known, and the people of Okinawa live longer than anywhere else in Japan. Much of that longevity is attributed to their diet of healthy Japanese food.

Okinawan food is diverse and health-giving, coming mainly from local farms and from the seas surrounding these sun-drenched islands. 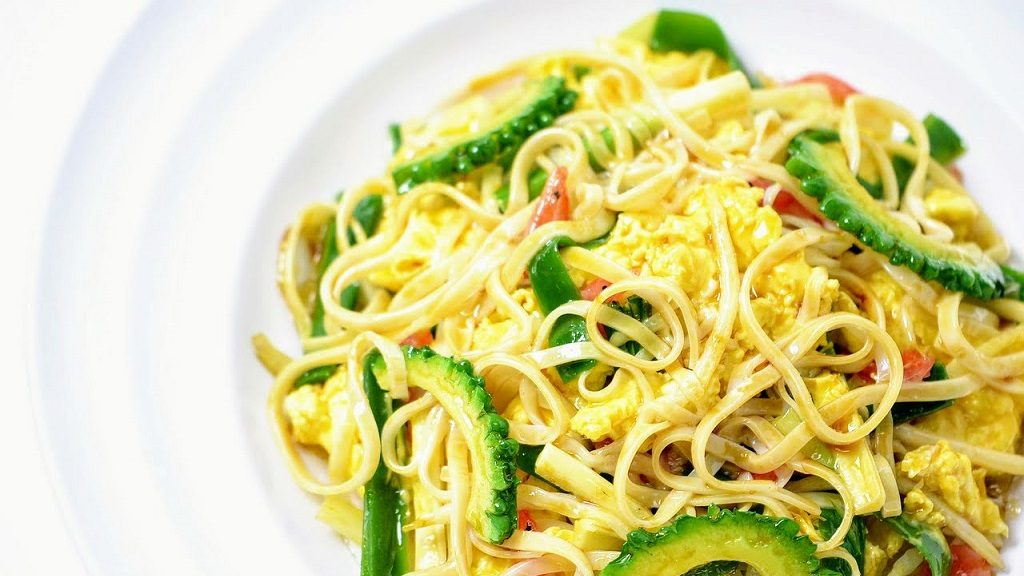 Okinawan soba is the signature dish and consists of wheat noodles served hot in a soup, usually with pork (rib or pork belly). This contrasts with the mainland soba, which is made from buckwheat noodles. 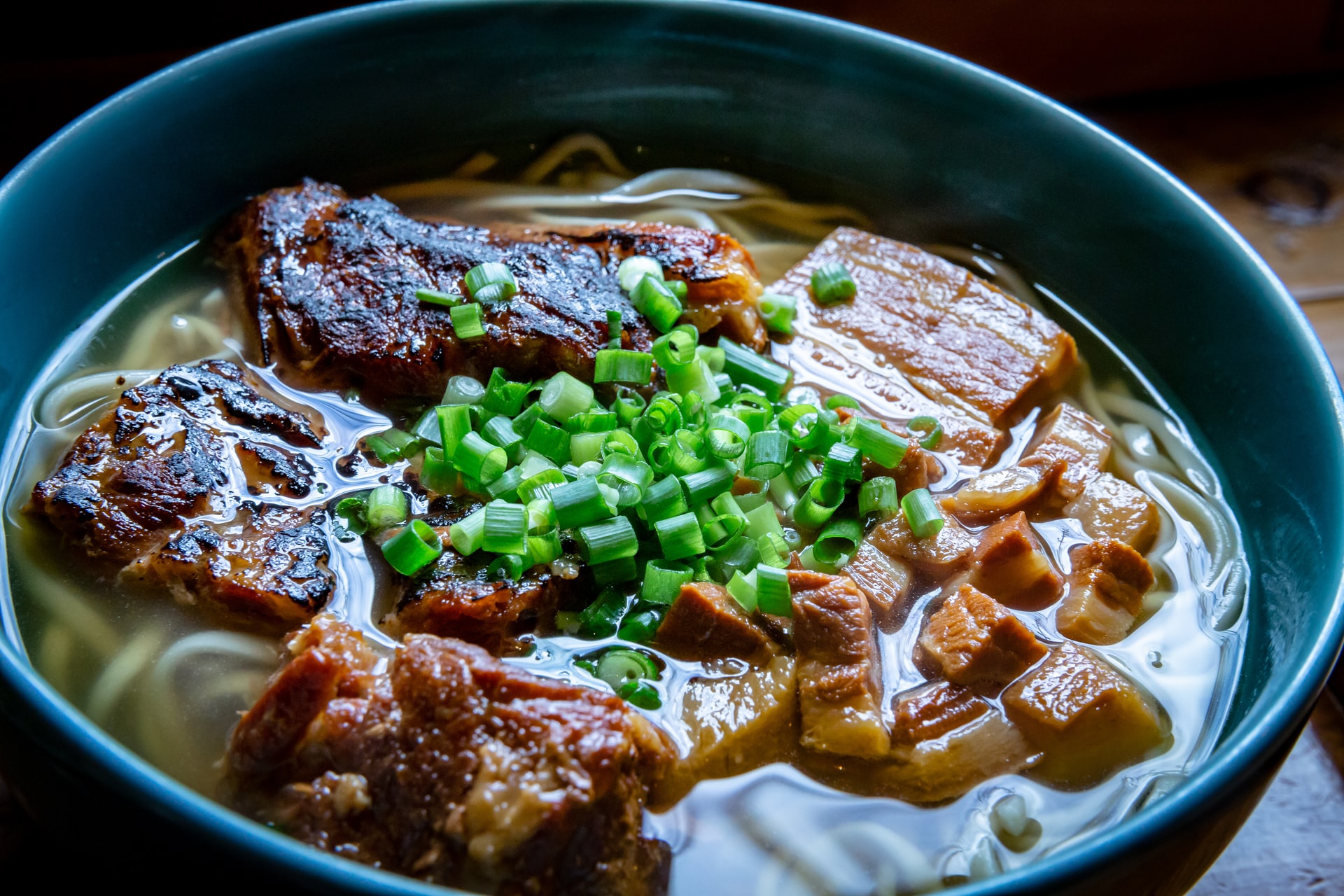 The military bases of the United States in Okinawa Prefecture are located on the Okinawa Islands.

American presence on the island has also led to some creative dishes such as taco rice, which is now a common meal served in bentos, and regular use of Spam.

You can spot tins of Spam, alongside some Tulip luncheon meat, in the video below. 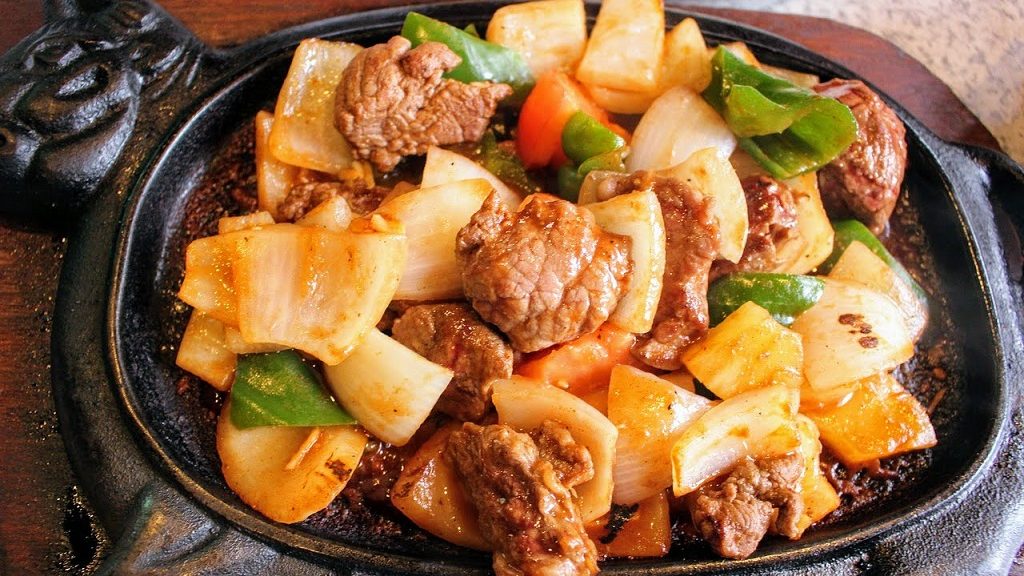 It's possible to learn how to cook Ryukyu cuisine with and English-speaking cooking instructor.  Sites like byFood specifically offer bookable food experiences focused on Okinawa. These include making both the Goya Champuru and Rafute mentioned above, as well as Yushidofu soup and Jyushi  - Okinawan pilaf.

byFood offers a fun farm-to-table experience in Okinawa guided by an organic sugarcane and banana farmer. Perfect for those with a sweet tooth and ideal for families.

On their Farm to Table in Okinawa: Brown Sugar and Banana Dessert experience you first get a tour of the sugarcane and banana fields where you harvest the ingredients, which you then use to turn into a tasty dessert of caramelized banana with brown sugar and banana ice cream. Yum! 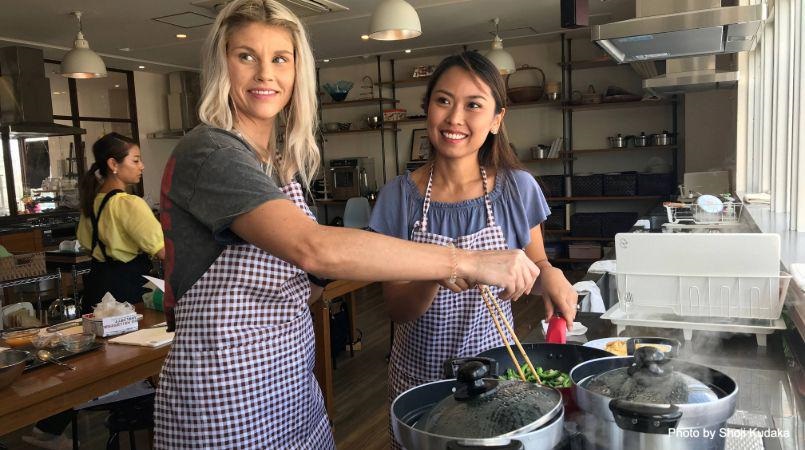 If you'd like to try your hand at the Goya Champuru and Rafute dishes, then I recommend checking out byFood's Ryukyu Cuisine Cooking Class in Okinawa. It runs for three hours, and is a combination of introductory talk from a local food expert, followed by a hands-on cooking experience where you'll learn to make four local dishes. 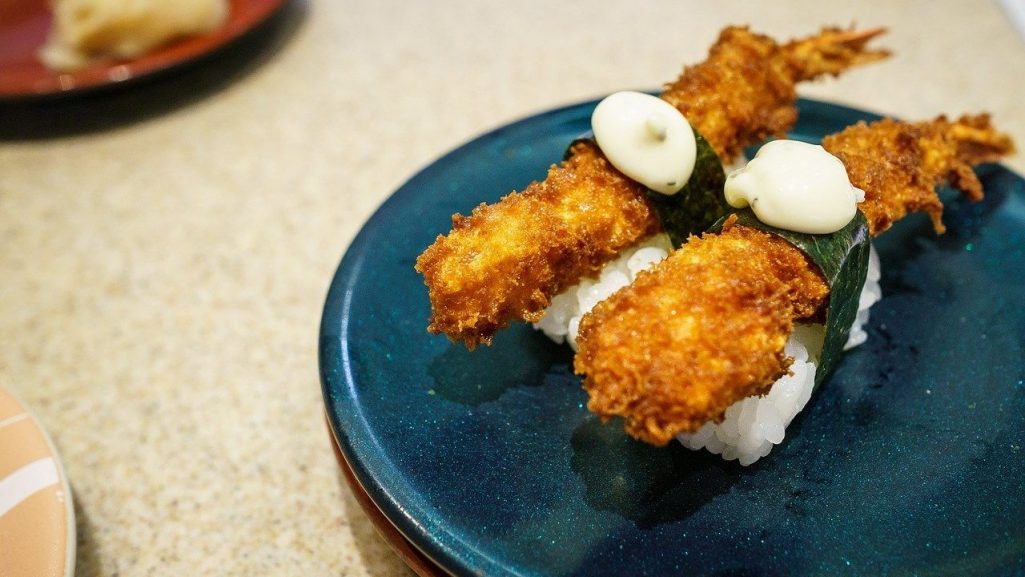 And it's not just the food that the locals claim aids their long lives.

Several tea varieties are grown in the region, with sanpin-cha being the most popular. Not least because its jasmine flavour is a good match for the local cuisine, but its also well suited to quenching thirst and delivering hydration during the hot, sticky Okinawan summers.

It also contains minerals and antioxidants that are good for general well being.

The rise in popularity outside Japan of Okinawa Milk Tea is a fashionable boba tea alternative that piles in the sugar and milk craved by western drinkers. It uses black tea, and adds to the mix roasted brown sugar and tapioca balls that are soaked in more of that brown sugar.

However, Mie in the Okinawa capital Naha, maintains the traditional essence of Japanese formality and traditional fine dining in the city.  All dishes are exclusive to Okinawan culture, particularly Okinawan royal cuisine, and prepared using only ingredients harvested and sourced from the region. 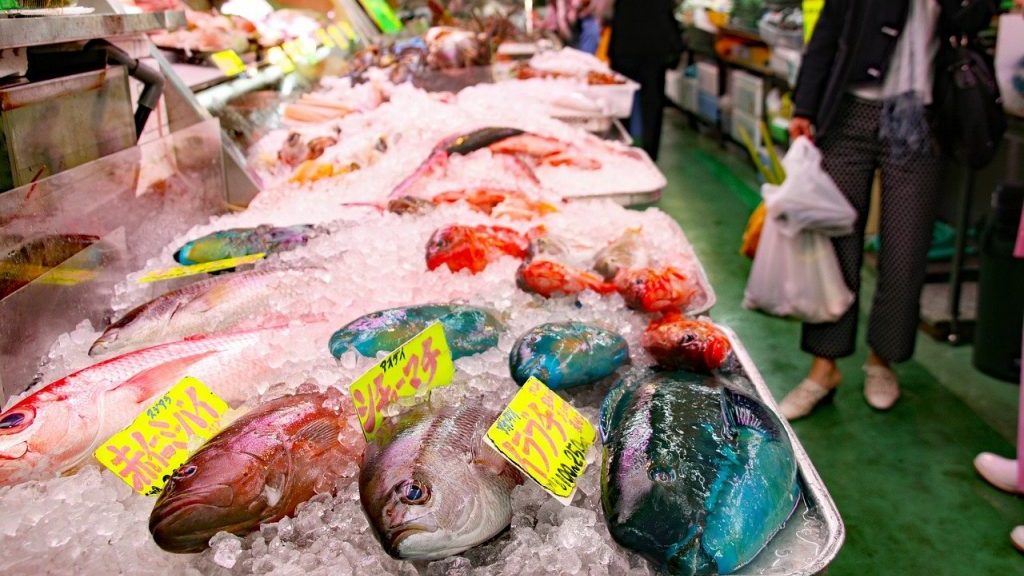 Makishi fish market in Naha is one of several on Okinawa

Awamori is Japan's oldest spirit. Using a manufacturing process that has hardly changed in 600 years, Awamori is made using fermented Indica rice.

Crucial to the method is the fermentation of the rice in stills to make koji mold, to which water and yeast is added to the distillation process

Check out the Ryuku Awamori website to learn more on this unique drink.

Satsumaimo are Japanese sweet potatoes. They have a purple/reddish skin and a creamy white flesh inside and have a much sweeter taste than sweet potatoes found elsewhere. In Ben Imo that flesh is an intense purple colour.

The locals are understandably very proud of their vivid  sweet potatoes and turn them into everything from ice creams, cakes, traditional wagashi sweets and cheesecakes. 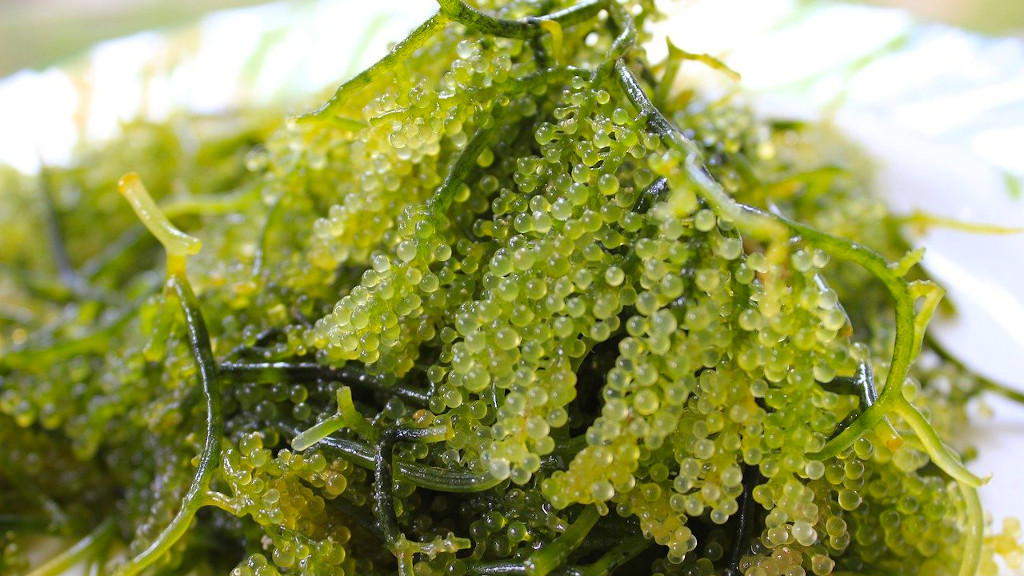 Umibudo, literally translated as sea (umi) grapes (budo) is a type of seaweed found in the warm tropical seas around the Yaeyama Islands in the southern most part of Okinawan Prefecture. Most umibudo are farmed off the coastline of the island of Miyakojima.

Unlike their more common seaweed counterparts, umibudo have tiny translucent balls instead of flat leaves. They're still green however and when bitten release a slightly salty juice that goes well with a nice cold local beer on a hot summer's day. 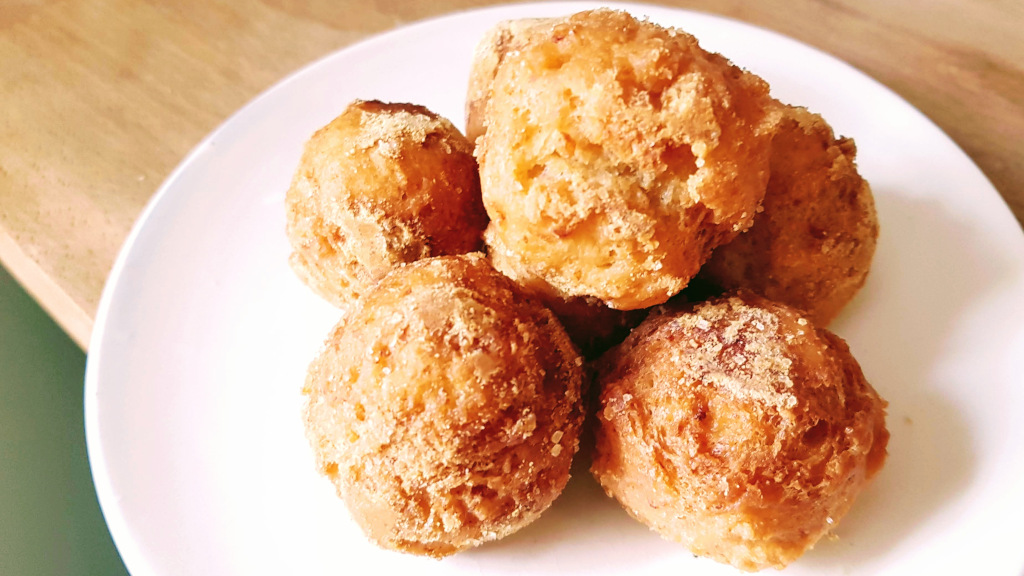 As if to prove there's always an exception to the rule, and most definitely *not* in the healthy food category are Okinawa's Sata andagi - or deep fried donut balls.

Saataa means 'sugar', while andaagii means 'deep fried'. Healthy they ain't! But tasty they most definitely are.

I happened to be walking through Harborland in Kobe and came across a popup Okinawan food and goods market.

Reflecting Okinawa's sun-kissed subtropical climate, this market was a riot of colour. Several staples of Okinawan foods and goods were available to buy.

Foods for sale included the American imported Spam alongside more traditional foods. There was a few stalls selling traditional wooden toys and hand carved utensils, as well as bingata cloth made in Okinawa.

Here's a short video I shot of the popup market.

Have you tried any Okinawan food? Share your experience and what you thought of it by leaving a comment below...

If you liked this article please share this image with friends:

Okinawa Recipies and Diet on Amazon

Things To Do In Japan