Partly because it has an excellent user interface and means I can make free international voice or video calls to other LINE users over the internet.

And partly because its range of characters is just so damn kawaii (cute)! :-D 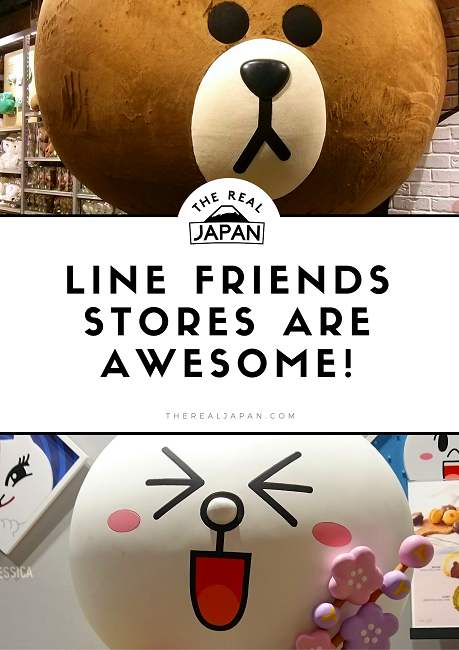 I prefer LINE to Facebook Messenger as it is far less intrusive in the personal data it requires to function. If you're not already familiar with the LINE app you can check it out here.

The company also offers the free LINE Pay app (similar to Apple Pay). Just download the app, register your credit card of choice online once and you're good to go. You can read more about LINE Pay HERE.

The range of characters in the LINE universe is diverse and sometimes odd. But there's a bunch of super cute characters at it's core. They are: 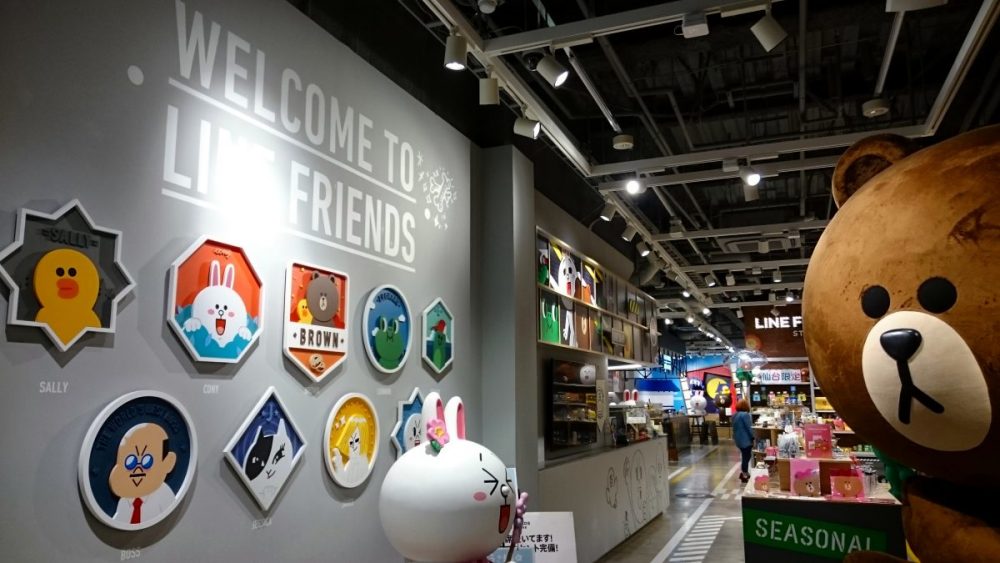 The LINE characters are famous throughout Japan, made popular in an animated TV show and series of mobile games. There are millions of users of the services across the far east.

(The parent company that owns the Line Corporation of Japan is actually Korean.)

As part of their brand building the company opened a number of LINE Friends stores - but only three of these were in Japan, in Tokyo (of course!), Fukuoka and Sendai. However, recently both the Fukuoka and Sendai store have permanently closed. :-( 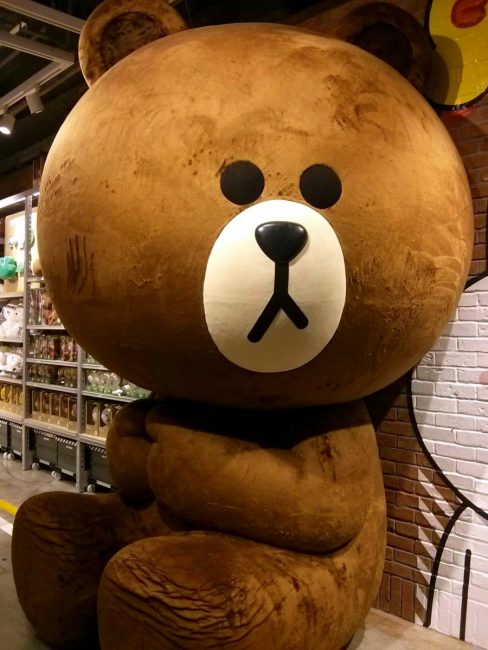 The last of the three Japan stores to open was the one in the city of Sendai, in Miyagi Prefecture, on the main island of Honshu, which I visited.

I'm not sure why Sendai was chosen as the location within Japan for the third store, but Sendai is a colourful and vibrant city - well worth visiting, even if the LINE Friends store has since disappeared.

Originally located inside the main central shopping arcade, the store included a cafe where you could sup on LINE Friends milk and eat LINE Friends chocolate bars. At the entrance was a huge, plush Brown figure - around 10 feet/3 metres tall. 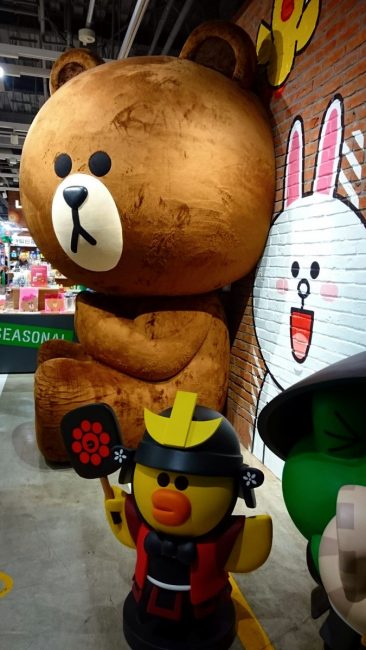 There were more (I'm not sure they can be referred to as 'life-sized'!) figures of Brown, Cony, Sally, et al.

There was also a Brown (and a Sally) kitted out in the samurai armour in honour of Doku-Gan Ryuu - the Sendai mascot. It was photo-opportunity heaven! 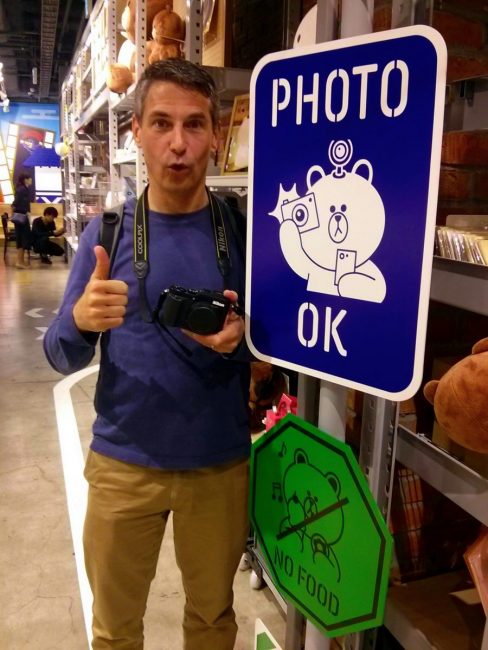 For the avoidance of doubt, there was a big sign inside saying "Photos OK!", so that visitors (a large proportion of whom were likely to already be LINE users) could readily take shots of them alongside their favourite characters and immediately post them on social media.

Not least sharing them with other LINE users who, if they're not lucky enough to have visited any of the stores, will be green with envy.

Can't come to Japan to vit the LINE stores? No problem. Check out the official LINE Friends Store on Amazon. 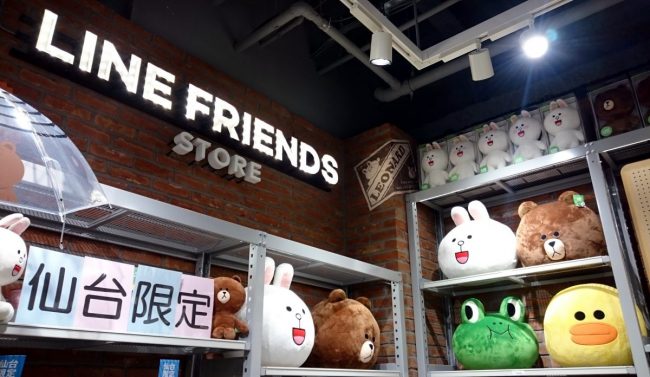 So much good stuff!

So much tempting merchandise!

I wished we could have spent more time in the store than we did. But we came across it by chance shortly before it was closing for the evening and we were heading onwards from Sendai on a morning train.

Rather incredibly we also came away not having made a purchase. In part, due to the time pressure, but also because so much (ie almost too much) of the stock was tempting. It would actually have been easier to buy something if there wasn't so much good stuff.

As it was, it was almost overwhelming. 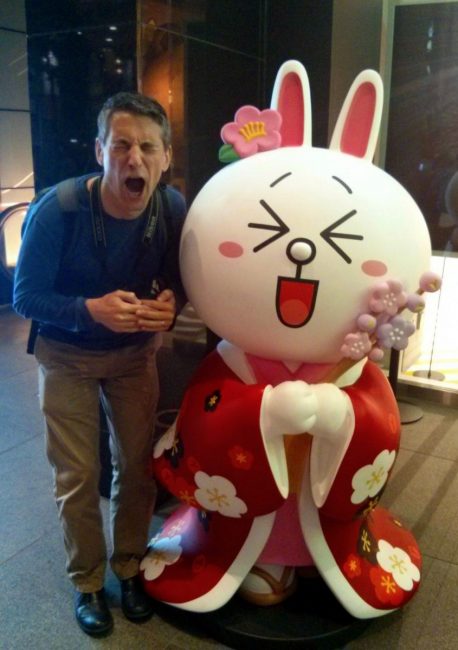 Cony doing an impression of me

For afficianados, it's worth noting that LINE stores sell products that are not available anywhere else. A real incentive for fans of Brown, Cony, Sally, and friends to visit the physical stores.

In addition to incredibly tempting merchandise, this site (and the one previously in Kukuoka) also had cafes.

You could easily spend a small fortune of you were so inclined. But there were items across the price range, ranging from character chocolate bars through to huge, plush figures of each of the major characters.

Whether you are into LINE Friends or not, I'd still recommend the Tokyo store as a place to visit. The characters are ridiculously cute and the quality of the goods extremely high. 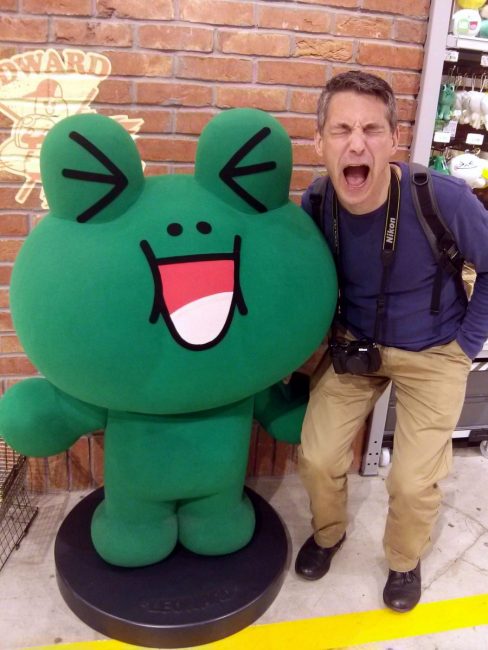 Leonard doing an impression of me

There was no cheap cashing in going on here. If you came away with your own Brown, Cony or Sally milk bottle(!), cushion, or large plush figure, you'd certainly get a quality souvenir for your money.

I only wish I'd grabbed a mug before leaving. :-(

I don't often get very animated with it comes to shopping (it's far from my favourite pasttime when travelling). But if you're a sucker for cute characters, beautifully conceived and designed souvenirs, made to a top-notch standard then you should visit a LINE Friends store when you are in Japan because they are definitely, absolutely awesome!

Are you a LINE Friends fan? Which is your favourite character? Have you been to any of the stores? If so, what goodies did you buy? Let me know by leaving a comment in the box at the bottom of the page...