How To Stay In A Decent Cheap Hotel In Tokyo

Is there such a thing as a cheap hotel in Tokyo?

One of the most common, recurring myths about Japan is that it is prohibitively expensive. So expensive in fact that, as much as you'd love to go there, you're simply not sure you can afford to go for any decent amount of time.

Whilst it's true that travelling in Japan isn't likely to be the cheapest trip you'll ever embark upon, it's also true that it doesn't have to be expensive.

Take accommodation as an example. A key aspect of any travel plans.

What do you think it would cost for two adults to stay in a good hotel in Japan for one night? How hard is it to find a decent cheap hotel in Toyko?

SEE ALSO: How To Travel in Japan Without Speaking Japanese 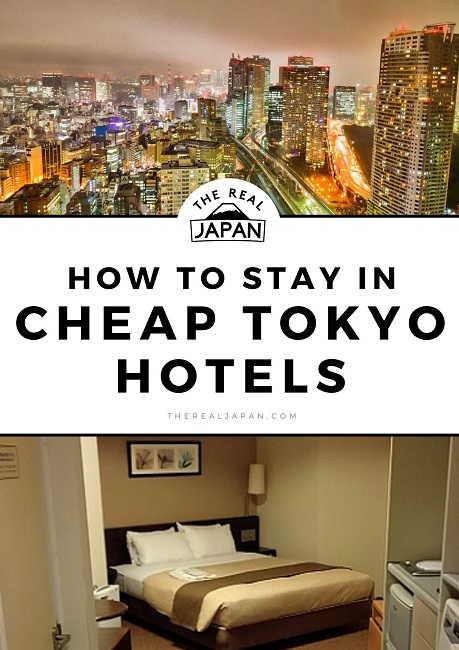 Here's a reasonable list of criteria you might want to apply to staying in a hotel in Tokyo - the capital city of Japan (and therefore one of the most expensive places to stay):

Some 'bonus' features would be:

Anything else? OK, so this is actually quite a long list of requirements/desires!

But, let's suppose you could have the benefit of all these features. In Tokyo, the capital of Japan - one of the most expensive cities in the world. What do you think that would cost?

Re-read through the list and write down a sum that you think you'd have to pay for all of this.

How much was it?

All of that in the middle of Tokyo, in Japan - one of the so-called most expensive cities in the world. I don't know about you, but to me that's not only not expensive, I'd say that's bordering on downright cheap! It's certainly a bargain.

And, just for good measure, in addition to all of the above, it had a full-sized washer/dryer machine in the mini-kitchen as well! It was as much like a mini-apartment as it was a hotel room and if you were there for any length of time would make a great base for a trip.

See details on this hotel on Booking.com

I’ve distilled 19 years of my experience into this ebook for you.

To take advantage of such reasonable prices it's good to book your reservation as far in advance as you are able. Hotels in Japan often offer an early booking 'plan'.

Some also offer special, internet only rates (when booking via their own websites) that can be discounted from the standard room rates or those available elsewhere.

But what would such a room look like in reality? Well, here's where I can also help. :-) On a recent stay in Tokyo my wife and I stayed in a room with all of the above features, including breakfast, for that total of just ¥14,000.

My recommended hotel in Gotanda

The hotel we stayed at was the Tokyu Stay in Gotanda.

Here's some photographs of our suite... 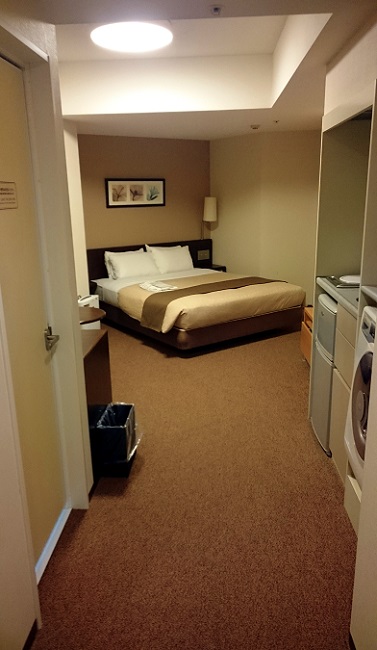 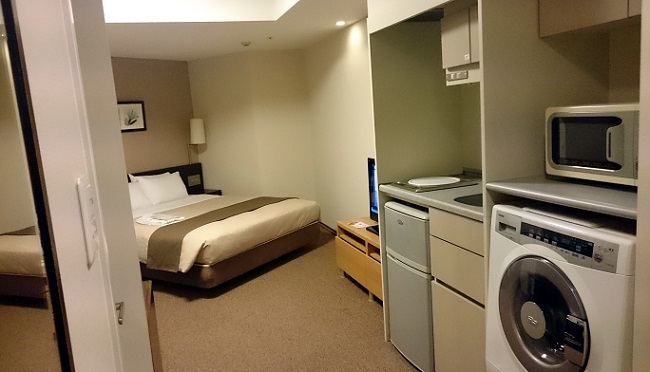 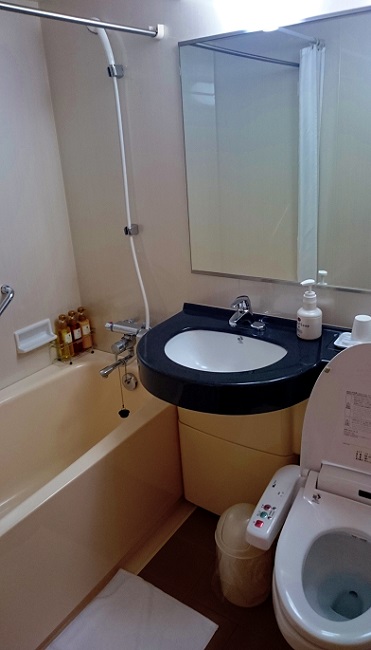 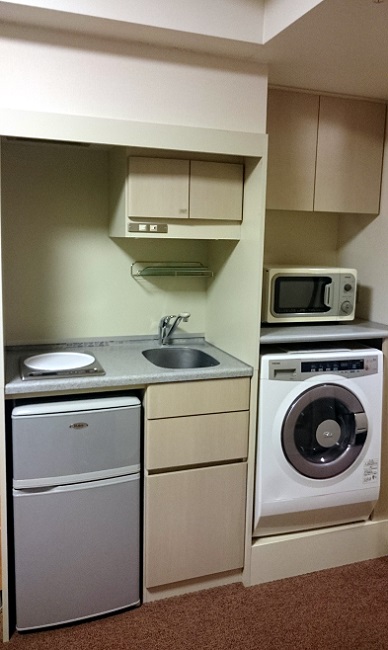 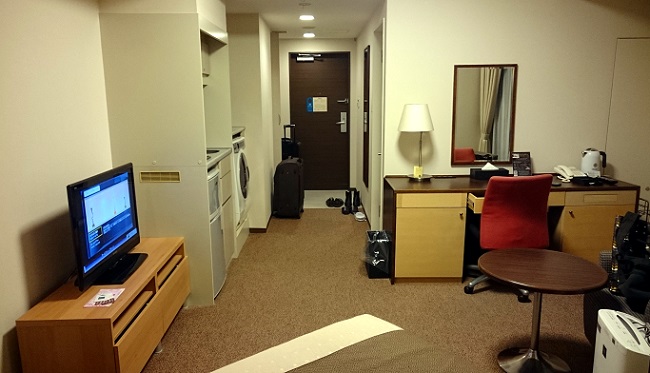 If you only need a single bed then the hotel offers similarly (though not quite so extensively) equipped single rooms for almost exactly half the price of the double example above - from around ¥7,000 (£39, $58, €53) per room per night, including breakfast.

I'm not sure about other countries, but in the UK a single room rarely costs half the price of a double room. 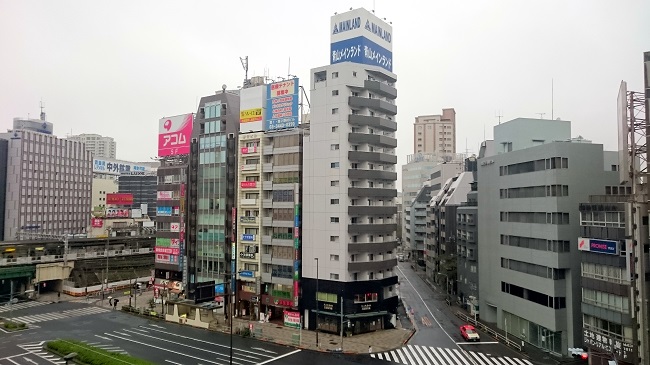 View of Gotanda from our balcony

The hotel is just 1 minute on foot from Gotanda Station. It's also convenient for Shibuya, Shinjuku, Shinagawa and Odaiba.

We chose it as it is only around 30mins from Haneda International Airport and as a base from which we could easily get to Shinjuku and Shibuya - where we had plans on our two days in Tokyo.

When we stayed there several floors were undergoing renovations (but the price we paid was not discounted on account of the works). There were signs around politely notifying guests of the works and apologising for any noise or mess.

Needless to say, despite the warnings we experienced neither.

Taking breakfast was a novel experience as the hotel itself doesn't have a kitchen or dining area at all.

Instead, it has a deal with the neighbouring Jonathan's Restaurant, a chain of what's known as 'family restaurants' in Japan - ie family and children friendly. You are given a breakfast token, when checking in, which you redeem at the restaurant.

This might initially sound a bit inconvenient, but both the hotel and the restaurant are in the same building and are connected to each other via a simple glass door accessed on the second floor! (Both hotel and restaurant have their own, independent separate entrances at street level - you wouldn't know they are connected inside.) 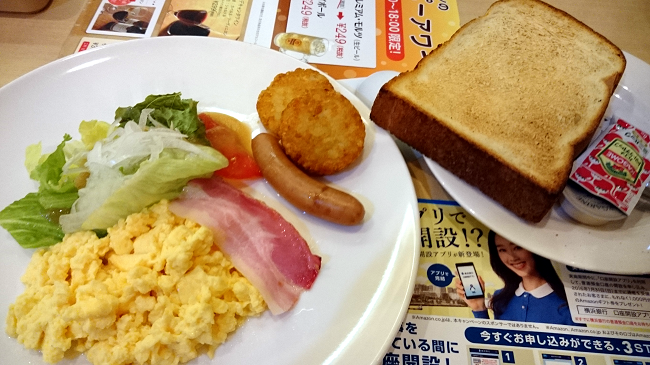 Compared to other hotels I've stayed in (it is possible to still pay less, and of course you can easily pay an awful lot more) but in terms of amenities and value for money this was just about the best deal yet.

*Note: Make sure you choose the correct hotel, there are several chains in Japan with similar names (like Tokyu Inn, Tokyo Inn, Tokyu Hotels or Toyoko Inn), but for the purposes of this article it's Tokyu Stay you're after.

Use this link to be sure you have the correct hotel: Tokyu Stay Gotanda.

This is an entirely independent review, there has been no considerations of any kind from the hotel in question. It was just a genuinely impressive hotel, in a good location for a great price. So I thought I'd share that with you!

If you have other needs, requirements or locations, try Jalan.net (one of the biggest online hotel booking websites in Japan):
http://www.jalan.net/en/japan_hotels_ryokan/?cc=eng_banner

Did you find this article helpful? Maybe you've experienced an even better deal on a hotel room? If so, please share your comments and queries by leaving a comment below...