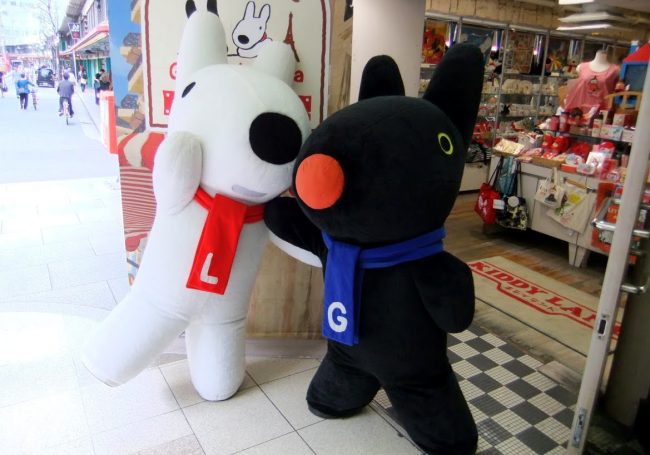 Gaspard and Lisa, are two friends, neither dogs nor rabbits but featuring elements of both, appearing in a series of children's books created by wife and husband Anne Gutman and Georg Hallensleben.

Gaspard (black with a blue scarf) and Lisa (white with a red scarf) go on various adventures. Gaspard, Lisa and their family members are drawn as animals, but live among humans in Paris, with the titular characters attending an ordinary school alongside human characters.

With more than 80 shops Kiddy Land is a long-running and popular chain of children's toy stores in Japan. The one featured here is near Umeda in Osaka.

Here, Gaspard and Lisa make a rare, in-store appearance much to the delight of the children present and, let's be honest, their parents and passers by too.

Watch as Lisa coyly peeks from inside the store before coming outside to meet the public. She's soon joined by her friend Gaspard and it isn't long before the two of them are having fun and striking poses for their adoring fans trying to capture a photo of this kawaii (cute) couple.