Hatsumōde is the first Shinto shrine visit of the Japanese New Year (starting on 1st January).

Although most people visit on the first, second, or third day of the year (as most are off work on those days), typically, we visit our local shrine a couple of minutes after midnight - just as the new year is starting on the 1st of January.

Prayers are made for the year ahead. New Omamori (charms or amulets) are bought, and the old ones are returned to the shrine so they can be burned.

A common custom during is buying a written prediction called Omikuji. If your omikuji predicts bad luck you can tie it onto a tree on the shrine grounds, to minimise any bad luck.

We walk to the shrine from our house - it takes about 10 minutes. It's almost midnight when we set off and the streets are silent.

Our route walking to the shrine actually first takes us past the exit. Streets nearby are closed to traffic and police guide vehicles, and worshippers, with red flashing battons. 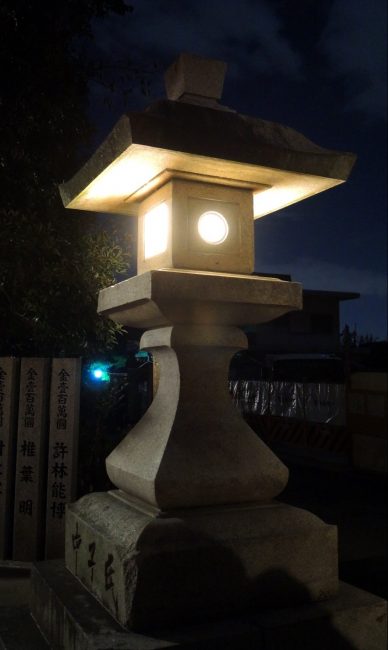 Tōrō - stone lantern in front of the entrance to the shrine

As we get closer to the shrine you can hear the general hubbub of chatter of those waiting in the queue that as formed in the road running up to the shrine. Clearly, visiting a shinto shrine at this time is a tradition the locals are keen to recognise and preserve.

Also the clapping of hands and ringing of the bell from the people praying.

In front of the shrine's main entrance are Tōrō - decorative stone lanterns. Behind the Tōrō to the right is the Chōzuya - where you purify yourself by washing your hands before entering the shrine.

Chōzuya - where you purify yourself before entering the shrine 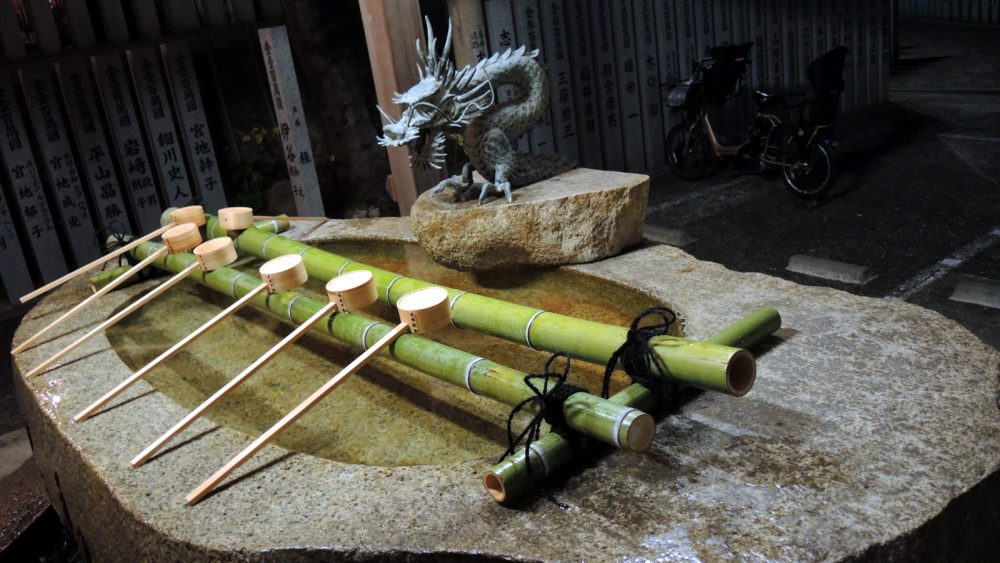 We join the queue to enter. On the left there is a map of the shrine indicating where prayers can be made. There is one main shrine wherer most people are heading, but there are a few other smaller shrines scattered around the site too.

We slowly walk up the steps to the join the line on the Sandō - the approach directly in front of the shrine. Queuing for our turn at the Honden - the main hall where the kami (spirits) are believed to exist.

Standing beneath the Torii (gate) entrance 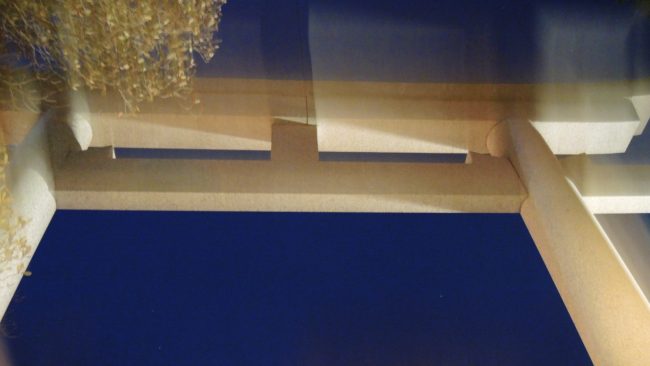 It's our turn to pray. We step up, bow, toss some money into the box in front of us then shake the thick rope hanging from the bell. Then you clap your hands twice - to get the attention of the spirits.

You then bow your head, close your eyes and make your prayers and wishes. Then step to the side, allowing the next worshippers to pray.

A decoratve painting of a dog to commemorate that this is the Year of the Dog is next to the Honden.

A decorative painting signifying the Year of the Dog 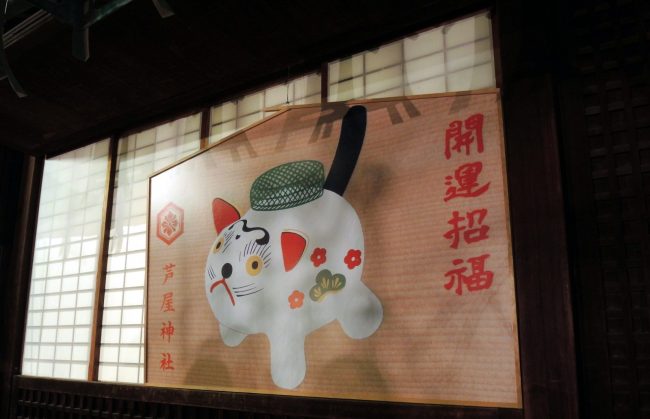 A booth selling Ema (wooden plaques bearing prayers/wishes), charms and amulets is next up. We choose a charm each to replace the one we bought here last year.

Our old charms are then added to a pile of items that are burned.

Omikuji are oracles or predictions for the year ahead. And pretty much everyone buys one to see what may happen in the coming twelve months.

Looking towards the Honden - the main shrine 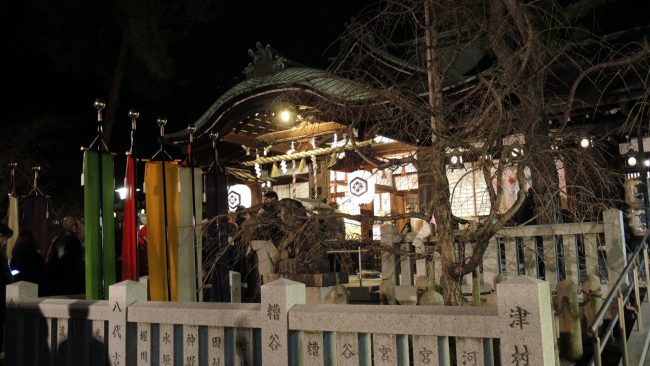 To choose your omikuji you shake a box containing sticks and turn the box upside down so one of the sticks falls out. Each stick indicating the prediction you should receive (there are a limited number of pre-written predictions).

You hand your stick to the shrine attendant and they give you the corresponding fortune.

My omikuji for the year ahead 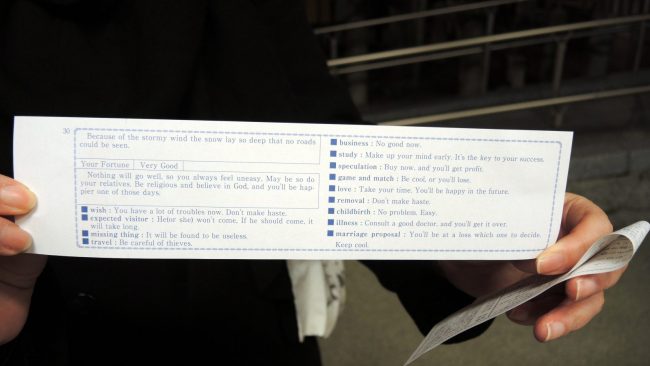 Chances are not all the prediction will be ideal. So, once they have been read, there is a tradition of folding and then tying the omikuji to a tree or tree-shaped frame. It is thought this minimises any bad luck the prediction may contain.

Before leaving, we take a quick look at one of the Setsumatsushaa (smaller shrines) where prayers are also offered.

It is now around 1am. We leave the shrine for the short walk home. If you ever get the opportunity of visiting a Shinto shrine on New Year's Eve - don't miss out.

It will be a memorable experience.

As it happens (and in juxtaposition to the eveninig up until this point) as neither of us was very tired we decide to take a walk to a local 24-hour 7-Eleven combini (convenience store) to get a coffee and a snack. 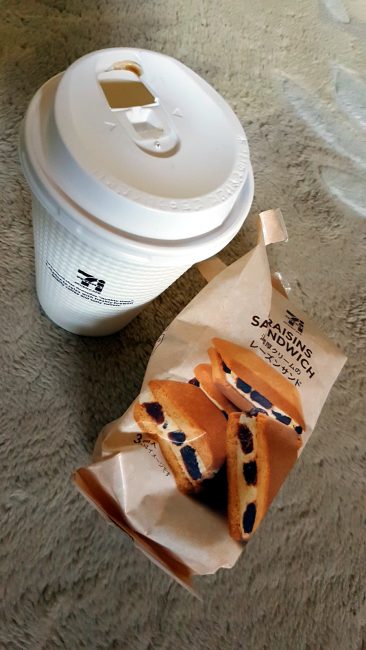 It was cold so we decided to return home to consume them.

It's a good job I didn't make a new year's resolution to drink less coffee and eat less sweet treats. :-)

Watch a short film of our visit to Ashiya Shinto shrine...

If you enjoyed reading this article, please share this image ↓ 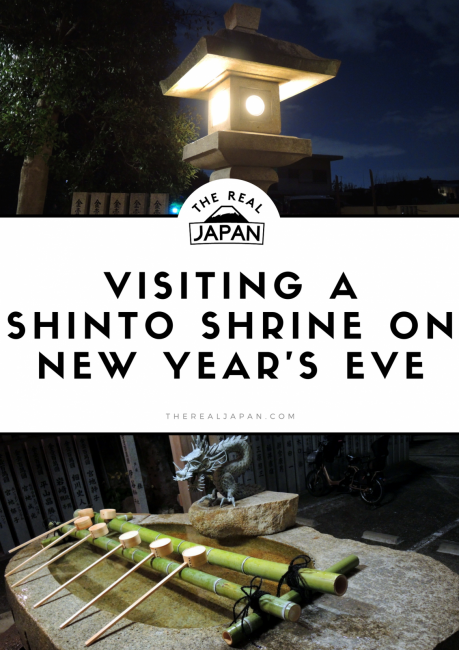 Get a FREE Guide to Amazing Adventures In The Real Japan:
http://buff.ly/1qjt6fe