In this short video, we see how the popular fish-shaped snack taiyaki are made.

The most common filling is red bean paste that is made from sweetened azuki beans. Other common fillings include custard, chocolate, cheese, and sweet potato.

Taiyaki's origins in the Meiji era

Taiyaki is believed to have originated in Tokyo in Meiji era, and now can be found all over Japan, especially in food courts of supermarkets and at Japanese festivals (matsuri).

They are similar to (but a more highly decorated version of) imagawayaki, which are thick round cakes also filled with sweet azuki bean paste or custard.

In this film, shot in the food hall of Daimaru department store in Ashiya, Hyogo Prefecture, you can see the taiyaki being made in special.

There are two types being made here, both with the traditional red bean paste filling, but one uses matcha green tea in the batter mix, changing the colour of the finished cake to dark green instead of the usual golden brown.

The batter mix is poured into a fish-shaped mould for each side.

The filling is then put on one side and the mould is closed. It is then cooked inside the electrically-heated mould, which is turned mid-way through to ensure the mix is cooked evenly and thoroughly, until both sides turn golden brown. 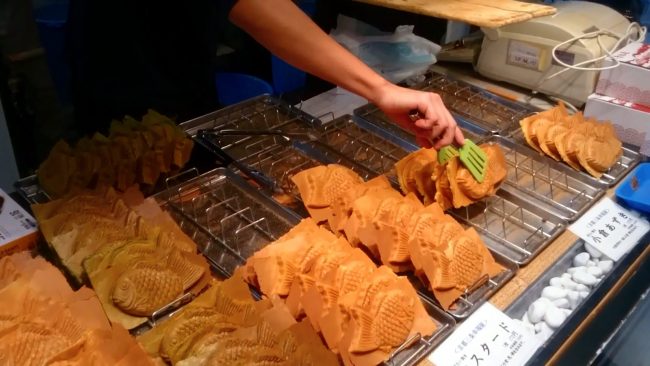 The finished taiyaki are then turned out onto wooden chopping boards, cut into individual servings and taken straight through to the adjacent counter where they are snapped up by eager shoppers on their way home, and who fancy a traditional sweet snack. Tip: they're good to eat with a hot cup of Japanese tea. :-)

Have you ever tried taiyaki? If so, let me know what you thought of it by leaving a comment below!