Going To A Thrilling Baseball Game In Japan

If I were to ask you what you thought Japan's most popular sport is I'm guessing you'd probably think it was sumo wrestling.

After all, it has been part of Japanese society for hundreds of years, and has always been reflected in its popular culture. Not so long ago you'd have been right.

However, over time sumo's popularity has declined, and its position as the country's “national sport” has been supplanted by baseball.

Here's why I recommend going to a baseball game in Japan... 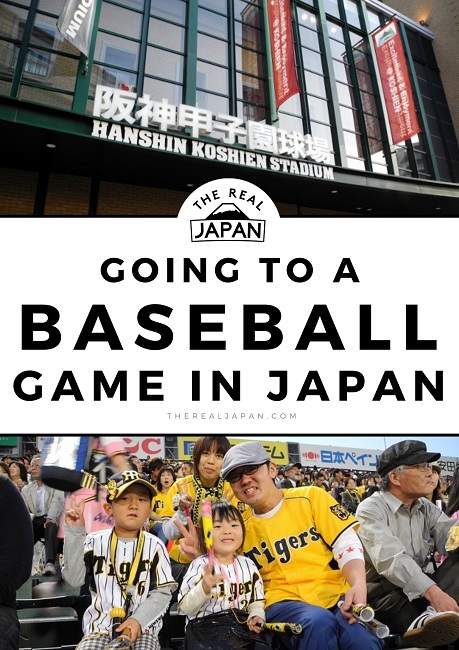 Going To A Baseball Game In Japan

With corruption scandals and foreigners winning the top trophies unsettling sumo, the Japanese have increasingly turned their attention to baseball.

Children play it all over Japan as a past-time and in high schools up and down the country, and it is as ingrained in the popular culture and the national psyche as it is in America. The pro baseball season is eight months long starting in April.

But this isn't some egregious example of American cultural imperialism. Rather it's a natural development of a sport that was originally introduced to Japan by American English professor Horace Wilson in 1872. 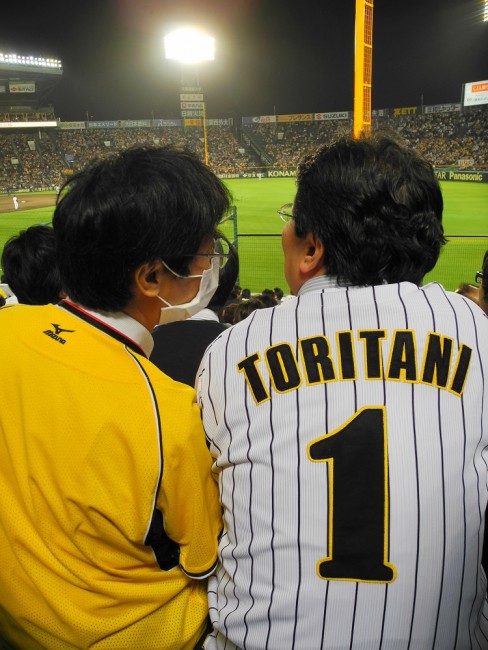 A lot of natural and cultivated talent for the game has grown down the years. So much so that the Japanese can field players that were every bit as competent as their North American counterparts.

Indeed, demonstrating the almost parity that exists at the higher levels of the game, Japanese players have left Japan to play in the professional leagues in the USA, and vice versa.

SEE ALSO: How To Travel in Japan When You Don't Speak Japanese 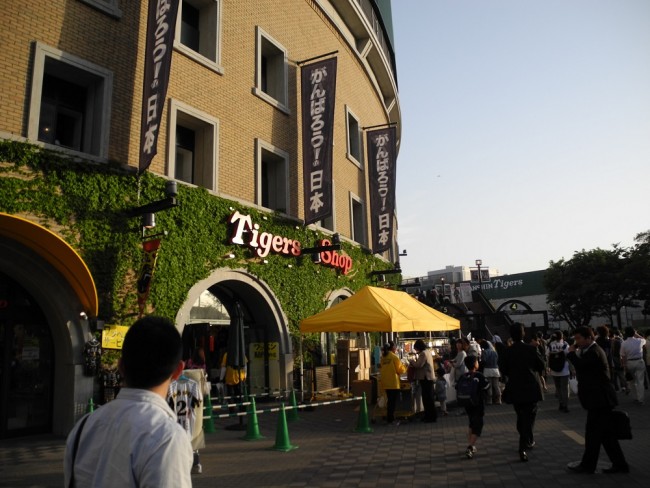 When in Japan, I'm based near Kobe, where two baseball teams are established - the Orix Buffaloes and the Hanshin Tigers. Of the two, the Hanshin Tigers are the better-known and more famous team. They also happen to be one of the oldest and most-popular teams in the country.

The Tigers have been playing at Koshien Stadium in Nishinomiya, Hyogo Prefecture (in between Osaka and Kobe) since 1936. They are a widely-supported team, albeit not the most successful. That honour goes to their arch rivals the Yomiuri Giants.

Growing up as kids in the 1970s, we thought most things from America were cool, so I had tried my hand at baseball a few times, in and out of school. I also had a copy of Hardball – an 8-bit video game for my Atari computer in the 1980s. 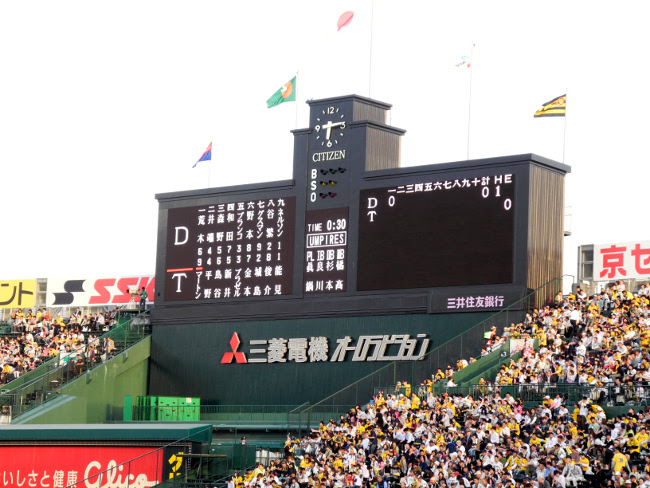 But as an adult, I had been generally impervious to baseball's charms - never having ever been to a live game.

But more recently, I thought I'd give it a go. This was partly due to my wife's parents being fans of the sport and regularly watching live games, and/or the summary footage, on TV at the end of the day.

How to buy tickets for a baseball game in Japan

Actually going to see it live makes for an entertaining and fun night out – even if, like me, your knowledge on the rules is rudimentary at best.

Tip: it can be difficult (sometimes impossible) to buy tickets on the day of a game for the most popular teams like the Tigers and the Giants. So, if you can, better to buy your tickets in advance - see below. 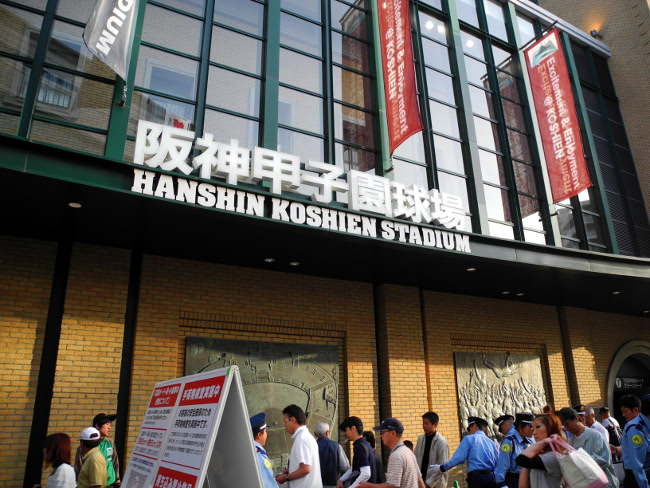 You definitely don't have to be a baseball fanatic to have a good time. It's a multi-generational experience too. With families of children, parents and grandparents making up a substantial proportion of the massive crowds the sport attracts every year.

In contrast to their stereotypical everyday lives, Japanese baseball fans are a raucous and vocal tribe. Expect constant songs, chants and teasing between home and away fans – all done with a smile and plenty of inflatable baseball bats.

For the casual observer especially, this is a big part of the appeal of being at a live game. Don't be surprised to find yourself joining in the chants before the end of the night.

(Links will open in a new tab)

Get Baseball Game Tickets for Marine Stadium in Chiba

Get Baseball Game Tickets for Fukuoka Dome in Fukuoka

Get Baseball Game Tickets for Chunichi Dragons at Nagoya Dome

Get Baseball Game Tickets for Seibu Dome in Saitama

Get Baseball Game Tickets for Sapporo Dome in Hokkaido

When you walk into the large bowl of Koshien Stadium it is an impressive sight. It is the oldest ballpark in Japan, and when it was opened in 1924, with a capacity of 55,000, it was the largest stadium in Asia. At its peak it could hold 80,000 fans.

Today it has a capacity of just under 48,000. The number of seats was reduced after repairs and improvements to the ground (and to make the stadium barrier-free) following the Great Hanshin earthquake in 1995. 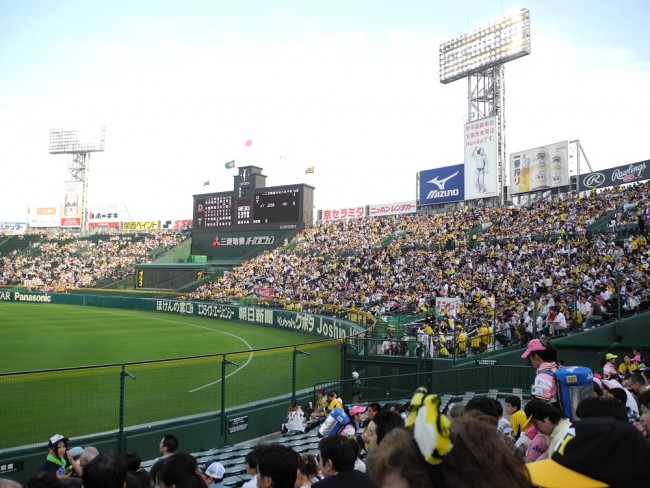 The legendary American player Babe Ruth played an exhibition game at Koshien during his tour of Japan in 1934. A statue outside the front of the stadium, near the ticket office, commemorates his visit, providing a popular photo opportunity.

As you might expect, most fans wear copies of their team's strip, resulting here in a sea of black and white stripes accented by yellow trim, often topped off with black baseball caps. The team also have a mascot. Or, more accurately, two mascots.

Torakkii (his name is a compound of 'tiger' and 'lucky' or 'lucky tiger') is quite a character. Skipping round the perimeter of the ballpark, cheering his team, keeping fans entertained whenever the pitch action lulls.

Occasionally being refreshingly cheeky, and trying to gain the affections of girlfriend Rakkii ('lucky'). 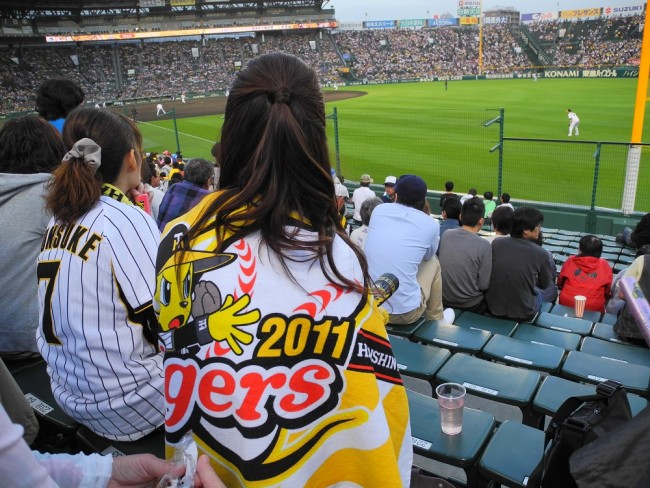 Many students work part-time in stadiums, earning extra money acting as vendors selling food and drinks. All the staples you might expect (hotdogs, hamburgers, pizza, fizzy, sugary soft drinks, beer) are available, as well as some you might not (sushi, ramen noodles, sake and whiskey).

These vendors carry large kegs of beer in packs on their backs just so you can get a cup of your favourite (sponsored) brew fresh from the pump.

Be prepared for the end of the game ceremony where tens of thousands of fans let go thousands of screaming yellow balloon streamers.

Apparently, after the Hanshin Tigers fans tried the same thing at a away game at the Yomiuri Giants' stadium they were barred from doing it ever again. So if you want to experience the screaming balloons be sure to go to a home game. 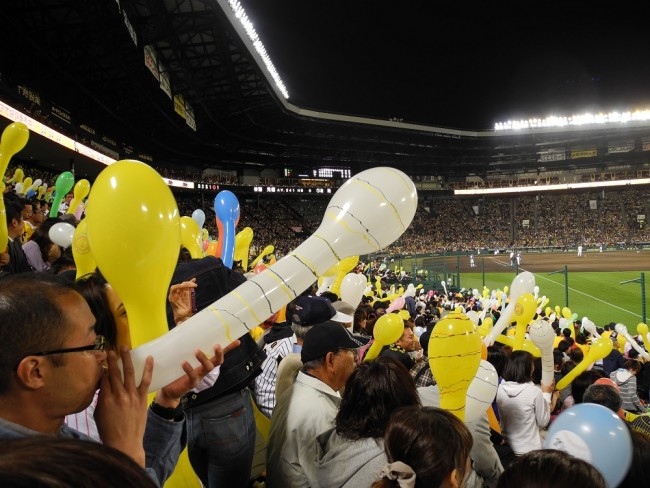 When should you go?

Aside from the height of summer when you might find the heat and humidity a bit too much, given that the baseball season stretches throughout most of the calendar year (end of March through to November), you can build going to a baseball game in Japan into many itineraries.

How to get to Koshien Stadium

Make sure you aim for the correct station though. The similarly-named Koshien-guchi Station on the Tokaido Main Line (also running between Osaka and Kobe) is several blocks away from the stadium, far less convenient, requiring either a lengthy walk or a taxi or bus to get to the ballpark.

Of course, when there is a game on the trains get very crowded but, like most things in public life in Japan, it's all very good-natured with rarely any trouble – even if it can be a tight squeeze. Trains are very frequent though, so you'll typically only have to wait a few minutes for the next one if you cannot get on the one in front of you.

Since train tickets in Japan are usually sold and bought as single journeys, it's a good tip when you arrive at Koshien Station to buy your return ticket before you head into the stadium. 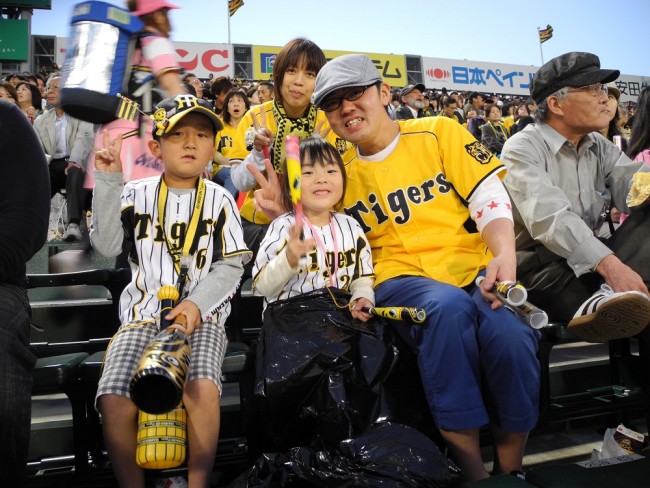 Even with the expected Japanese efficiency (and extra staff that are put on during games to help and guide people) there will be thousands of people trying to buy tickets on the way home, leading to some potentially daunting queues.

However, having bought your ticket in advance, you can just head straight for the platform to catch your train.

Going to watch other teams

If it isn't convenient or possible for you to go to see the Hanshin Tigers in Kobe, or you want to see another team, there are pro teams across much of Japan that you can go to watch, and which will give you a similar experience.

Be sure to check our list of teams and cities for which you can book tickets in advance.

The JapaneseBaseball.com website is an extensive resource and has a helpful page which has instructions (including maps) on how to get to the major baseball teams' stadiums.

If you have been to see the Hanshin Tigers, or any other baseball team in Japan and have any tips, recommendations or memorable stories please share your experiences by commenting below.

Get Baseball Game Tickets for Marine Stadium in Chiba

Get Baseball Game Tickets for Fukuoka Dome in Fukuoka

Get Baseball Game Tickets for Chunichi Dragons at Nagoya Dome

Get Baseball Game Tickets for Seibu Dome in Saitama

Get Baseball Game Tickets for Sapporo Dome in Hokkaido

Visiting a Sumo Tournament In Japan

What To Eat In Nagoya: Top 5 Delicious Local Dishes