The very first time I went to Japan it was mainly for leisure, but also partly for business.

Meaning they had a counterpart in Japan. And the one in Japan was some years behind in its area of business that I specialised in.

My First Trip To Japan

I was arranging my first trip to Japan, and it occurred to me that since I was travelling to the other side of the world, there was a rare opportunity to meet with our Japanese counterparts.

I pointed this out to my CEO and suggested that it was too good a chance not to 'pop in' on our equivalent agency whilst I was in the country.

Fortunately for me, after a bit of discussion, he agreed.

Return Tickets on the Shinkansen

My employer agreed to pay for a return ticket on the shinkansen (bullet train) from Osaka to Tokyo (I was to be based near Osaka and the Japanese agency was in Tokyo), overnight accommodation in a business hotel and one-and-a-half day's expenses.

I had no plans to visit Tokyo for my personal trip but having made the case to my employer to incorporate business, I was now going to see Tokyo for the first time – for free!

I arrived in Tokyo on the shinkansen (my first ever time using these futuristic trains) from Osaka, the evening before my day with the Japanese agency.

Take A Guided Tour of the Tokyo National Museum

That next day I spent at the agency's offices with their CEO and his number 2, doing a Q+A (me providing the answers in English) on the minutiae of licensing photocopying in the UK education sector, and how that might be transferred to the Japanese education system (phew! wasn't *that* fun?).

We finished mid-afternoon, and the rest of my day was free. The 'number 2' executive I'd spent the day with (whose name has long since been forgotten in the mists of time), who could speak good English and had been providing translation services throughout the day, asked me where I'd like to go.

I said the Tokyo National Museum.

The museum first opened its doors in 1872, making it Japan's oldest national museum. It's in Ueno Park, in Taito, the north-eastern part of Tokyo. We arrived by taxi outside the main entrance.

Approaching the museum I noticed there were uniformed staff that could almost have been mistaken for guards. As we walked towards them I saw that both staff took off their hats and bowed.

Certainly not unusual in itself in Japan. However, this was more than you would just to be polite to members of the general public (the deeper the bow, the more respect is being displayed).

​The Unexpected and Curious

My host and the guards exchanged a few words (which I couldn't understand) in a decidedly chirpy manner. The staff seemingly delighted to see my guide.

This was unexpected. Clearly, they must have known him. Curious!

Perhaps he was a regular visitor? My host didn't translate or explain, but simply ushered me inside.

​Once inside, the deference towards him continued. I realised that he must have been connected to the institution in some manner, either currently or in the past. Perhaps he was on the board of trustees, or something similar (or so I speculated)?

​​​A Peek Behind The Scenes

As I was heading back to Osaka later that evening, we didn't have a great deal of time to see much of what is Japan's biggest and finest collections of art and archaeological objects. Presented with the wealth of riches to be found in the National Museum, he asked me what, in particular, I wanted to see.

“Let's start with the collection of samurai armour”, I said. “Follow me”, he replied. Then cryptically added: “I can take you behind the scenes. It will be quicker to get there”.

Taking just a few steps to one side, he pushed on a section of the wall that magically opened revealing a hidden door! We stepped inside and were instantly 'behind the scenes' in a utilitarian service corridor used exclusively by staff to get around the building, whilst avoiding the public areas.

After some twists and turns, and a few steps, we popped out on another level right inside the samurai armour gallery.

Going from the dull access walkways, suddenly out into the heart of their fine collection of historical artefacts was an almost surreal (albeit rather thrilling) way to experience such cultural treasures!

We continued in a similar manner, stepping out of the public areas into back corridors, popping out into public galleries for the next couple of hours. It was a remarkable and unforgettable experience.

Going For a Few Drinks

It was getting to early evening, and conscious that I only had a couple of hours before I had to catch the shinkansen back to Osaka, my (now slightly mysterious!) benefactor suggested, in the time-honoured Japanese businessman tradition, that we go for a few drinks over a bite to eat.

We went to an izakaya-type bar, bustling with salarymen who, by Japanese standards, were already out of work earlier than most. We slowly ate skewered grilled chicken with leeks washed down by a few glasses of draft Japanese beer.

Had I not a train to catch, I could have stayed here for hours. Indeed, that's what most salarymen do, every day, all over Japan.

But I had to depart.

I thanked my host profusely for his hospitality, generosity and for the personal guided tour – the means by which I still, to this day, do not fully understand.

Enjoyed this article? Please spread the love by sharing this image ↓ on social media! 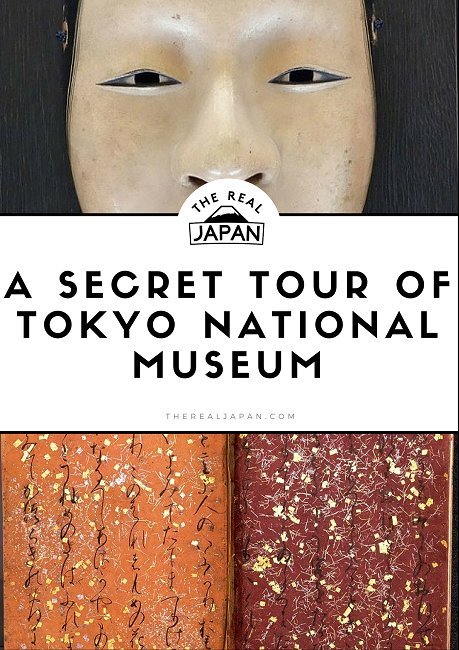 Have you ever had an unexpected experience like this? If so please tell me about it by leaving a comment below...